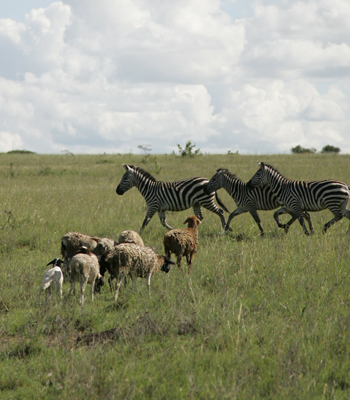 Scientists at the Nairobi, Kenya, headquarters of the International Livestock Research Institute (ILRI) are this week hosting a regional inception workshop on a new CGIAR Research Program on dryland agriculture.

Three livestock-based models likely to be discussed at this week’s dryland agriculture workshop are index-based livestock insurance (see website and news), an innovation for pastoralists that is being piloted in northern Kenya; following research-based recommendations on how to better manage drought cycles in the Horn of Africa; and a Wildlife Lease Program to counter loss of wildlife migration on Kitengela rangelands, an hour’s drive from Nairobi, which is crucial for Nairobi National Park.

Farmbizafrica, a news website launched in April 2010, covered the latter in a story it published on the Kitengela Wildlife Lease Program in Mar of this year. This program, which has proved successful in Kenya’s wildlife-rich Masailands, involves the establishment of ‘eco-conservancies’, which work to protect both livestock-based pastoral livelihoods and populations of wildlife that have shared East Africa’s rangelands with the Masai for thousands of years. The following are excerpts from the Farmbizafrica  story.

‘[A] new model of paying pastoralists for conserving the ecosystem in reserves and parks is helping them diversify their income and end their dependence on rain fed agriculture alone.

‘The payment of pastoralists, mostly Maasais, has successfully been piloted in areas near Maasai Mara National Reserve and Kitengela, near the Nairobi National Park. In both areas, Maasai people have formed ‘eco-conservancies’ to protect their grazing areas for livestock and wildlife alike.

‘Under the payment for [e]cosystem services scheme, pastoralists are given monetary incentives in exchange for allowing their land to be used for ecological services that promote conservation, for example allowing free movement of wild animals in their land.

‘The pastoralists voluntarily agree not to sub divide, fence or cultivate the land they are in, in return for a fee that is paid to them. The pastoralists also commit to keeping the land open for livestock and wildlife grazing.

‘About 357 households living in Kitengela have given about 16,800 hectares of private land under the scheme, where they are paid roughly Sh900 per acre per year.

A report by the International Livestock Research Institute indicates that the income from the payment constitutes 59 per cent of the total off-farm earnings among participating households, but experts argue that the payment still remains paltry considering the sacrifices the pastoralists make.

‘. . . However in order to ensure that the conservation payment works for the long term, experts at the International Livestock Research Institute (ILRI) are investigating the trade offs to quantify how such interventions could be more equitable to pastoralists inhabiting these wildlife-rich areas.

The scheme comes hot on heels of a report recently released by ILRI which showed that despite government decision to invest Sh8.5bn in agriculture and funding irrigation schemes in drought ravaged parts of Turkana, the only feasible way to address future droughts is through investing in pastoralism in dry lands.

‘The report . . . argued that herding makes better economic sense than crop agriculture in many of the arid and semi-arid lands that constitute 80 per cent of the Horn of Africa, and that supporting mobile livestock herding communities in advance and with timely interventions can help people cope the next time drought threatens, and that pastoralists switching to growing crops that require extensive investment in irrigation would be counterproductive in the long run. . . .’

Other organizations represented at the ILRI-hosted CGIAR regional dryland workshop this week include the International Water Management Institute (IWMI), the International Crops Research Institute for the Semi-Arid Tropics (ICRISAT) and the World Agroforestry Centre (ICRAF). To learn more about the workshop, contact Pauline Aluoch at p.aluochATcgiar.org

Read the ILRI drought report itself: An assessment of the response to the 2008–2009 drought in Kenya: A report to the European Union Delegation to the Republic of Kenya, by L Zwaagstra, Z Sharif, A Wambile, J de Leeuw, M Y Said, N Johnson, J Njuki, P Ericksen and M Herrero; Nairobi, Kenya: ILRI, 2010.