We hope you enjoyed our first issue ofLivestock Matter(s), a monthly round-up of livestock development news, publications, presentations, images and upcoming events from ILRI and its partners. Produced on the first of each month, this round-up highlights what you may have missed. You can download a print version – or sign up to get Livestock Matter(s) in your mailbox each month.

Women farmers in India meet ILRI management and board in 2012

Steve Staal has been appointed ILRI’s new regional representative for East and Southeast Asia. Staal recently led ILRI’s Markets, Gender and Livelihoods Research Theme and in the past year served as ILRI’s interim deputy director general for research. An American citizen who has lived and worked in developing countries throughout his life, Staal will be based at the headquarters of the International Rice Research Institute (IRRI), in Los Baños, The Philippines.

The BecA-ILRI Hub: An African life science centre of excellence
Frank Rijsberman, CEO of CGIAR, reflected on his recent visit to Nairobi by highlighting his visit to the Biosciences eastern and central Africa (BecA)-ILRI Hub: ‘Seeing the vitality and dynamism of this major African center of excellence in the biosciences in action was a real highlight of my visit to Nairobi. What was considered risky, and maybe even impossible to do in Africa, just 5 years ago has become reality – a true success story for research in development. That provides me great encouragement to dare to dream: what may not seem possible today can become reality tomorrow.’

CapDev–New name, new mandate
The Capacity Strengthening Unit at ILRI has changed its name and mandate. This short film explains the new name and upcoming changes in the unit.

Conference explores bioscience innovations in and for East Africa

Eastern Africa was the focus of a transformational forum to harness the power of biosciences innovations in February, when more than 120 scientists, policymakers, private sector actors, donor agents and other stakeholders gathered in Addis Ababa, Ethiopia, for the first Bio-Innovate Regional Scientific Conference 25-27 February 2013. The conference shared the successes and challenges of implementing Bio-Innovate’s work in applying bio-resources innovations to support sustainable growth and transformation of the agricultural and environmental sub-sectors.

What we need to know to better control lung plague in Africa
A meeting to assess the current status of contagious bovine pleuropneumonia (CBPP) research took place at the ILRI campus in Addis Ababa, Ethiopia, 25–26 Jan 2013.  The meeting was sponsored by the Bill & Melinda Gates Foundation (BMGF), German and international development cooperation (GTZ) and the Livestock and Fish CGIAR Research Program. The meeting assessed the current status of CBPP research, what is known, what is unknown and what is needed to better control the disease in Africa, with a view to developing a consortium approach to research on the disease.

Digital stories: A creative way of capturing and communicating research
Short films composed of digitized still and moving images, sound and text effectively present compelling stories in an engaging format. Digital stories can be created by people everywhere, on any subject and shared electronically.

Better managing the hardy native ruminant livestock of Guinea and Mali
Although livestock play a central role in rural development in West Africa, traditional livestock systems are in general characterized by high mortality rates, low reproductive rates and low offtake rates. Furthermore, the presence of trypanosome-infected tsetse flies in the subhumid and humid areas seriously holds back the potential for livestock production. The region’s endemic ruminant livestock, however, are highly adapted to the local environmental conditions and are able to survive and remain productive in tsetse-infested areas with minimal inputs where other breeds succumb to disease and other hardships. The conservation and improvement of these native African breeds have potential to greatly improve the livelihoods of West Africa’s livestock keepers.

Researchers from the University of Delaware, Iowa State University and North Carolina State University recently visited Uganda to collect genetic samples from African chickens. The study will compare the genes of the African chicken with those of American broiler chickens to gauge how the two species’ genetic makeups help them cope with heat stress and diseases. The group also collaborated with other groups, including ILRI, which gave the American researchers access to Kenya chicken samples ILRI has collected in Kenya.

Not Worlds Apart: Interview of Jimmy Smith on food security 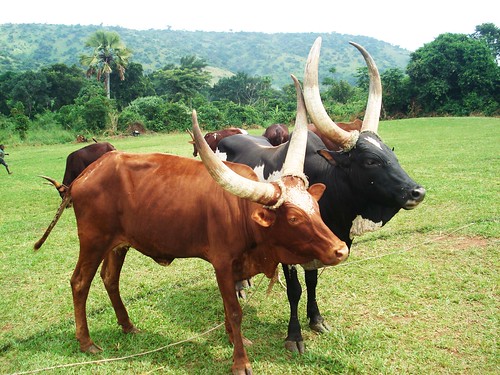 ‘The scale may be different, but livestock producers across the world face similar issues. Feed and animal health are two vital factors that must be managed in livestock whether the herd is of two to three head in Africa or on the vast scale of northern Australia,’ said Jimmy Smith, ILRI’s director general. Smith was one of several speakers at a high-level forum held in Sydney, Australia, late last year to discuss food security in Africa.

CGIAR news – updates from the research programs we work in

On 6 Feb, the Smallholder Pig Value Chains Development (SPVCD) and the Safe Food, Fair Food (SFFF) projects, which are led by ILRI in Uganda, launched assessment of the pig value chain in Mukono District. The projects are working to improve the livelihoods, incomes and assets of rural and urban smallholder pig producers, particularly women, and to support intensification of livestock production by improving the quality management of livestock products. The assessment is taking place in twelve villages of Mukono town, Goma, Kyambizi and Ntenjeru sub-counties and will continue until Apr 2013.

The Global Crop Diversity Trust and the CGIAR Consortium announced a new agreement that will bring financial stability to 11 international genebanks of CGIAR. These include the genebank maintained by ILRI at its campus in Addis Ababa, Ethiopia, which stores 18,000 seed and plant samples of 1,500 different species of livestock fodder and forages.

Communities around Woreilu Woreda, located in Ethiopia’s Kabe Watershed, agreed to stop free grazing after receiving advice from staff in a project on ‘Enhancing communities’ adaptive capacity to climate-change-induced water scarcity in drought-prone hotspots of the Blue Nile Basin, Ethiopia’. This project is implemented by ILRI, the United Nations Environment Program and Wollo University. More on these digital stories.

See photos from the conference