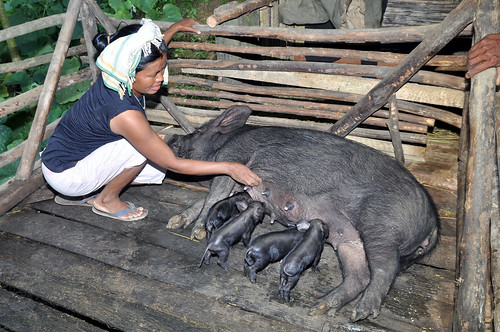 Last month (27 Feb 2014), the International Livestock Research Institute (ILRI) and partners convened a meeting of actors in the pig sector in Nagaland, India, to review policies that could better support pig farming in this very poor state.

As reported in the Eastern Mirror, a newspaper in Nagaland, the 35 participants of the day-long meeting discussed ways of ‘mainstreaming models for pig-based livelihoods’ across the state.

The Morung Express reported that the meeting led to adoption of the project’s approaches by Nagaland’s veterinary and animal health department, which is also considering setting up ‘state-level classical swine fever control programs and mobiliz[ing] more resources to support initiatives to boost pig farming’.

A working group comprising Tata Trust staff, Nagaland government officials and ILRI scientists has been tasked with coming up with proposals for widening adoption of the models across the state.