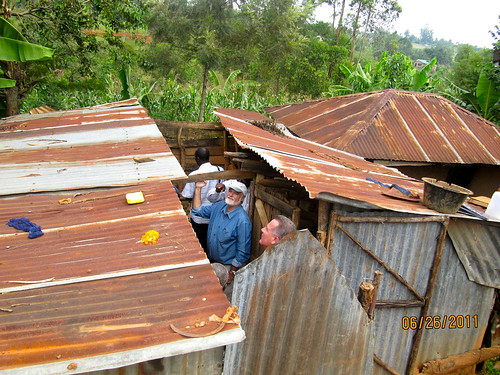 In its wisdom, an Inter-Agency Donor Group (IADG) on pro-poor livestock research and development agreed in 2013 to explore ways to better coordinate their investments in dairy development in East Africa.

The Netherlands, one of the IADG members, offered to take the lead in this and organized a study on commercializing dairy value chains in six countries — Burundi, Ethiopia, Kenya, Rwanda, Tanzania and Uganda. Results of the study are being discussed this week (1–3 Apr 2014) in an expert consultation being held in Uganda with stakeholders in the region’s dairy development, including policymakers, industry players and representatives from farm organizations, development agencies and research institutions.

Isabelle Baltenweck, an agricultural economist from the International Livestock Research Institute (ILRI), which is based in two of the targeted countries (ILRI is headquartered in Kenya and had a principal campus in Ethiopia), is a member of a ‘guiding group’ for this donor dairy collaboration project. Together, the members of the guiding group comprise a veritable ‘who’s who’ among donor agencies investing in East Africa’s agricultural development, representing, in addition to ILRI, the Association for Strengthening Agricultural Research in Eastern and Central Africa (ASARECA), the Australian Centre for International Agricultural Research (ACIAR), the Bill & Melinda Gates Foundation (BMGF), the German Society for International Cooperation (GIZ), the International Fund for Agricultural Development (IFAD), the Netherlands Government, the United Nations Food and Agriculture Organization (FAO) and the United States Agency for International Development (USAID). The Centre for Development Innovation (CDI), of Wageningen UR (a university and research centre in the Netherlands that focusses on healthy food and living environment), serves as secretary to the guiding group.

This week’s consultation will prioritize actions to capitalize on the (big) development opportunities offered by this region’s booming dairy sector, and determine the roles best played by different actors among relevant donor agencies and within the public and private sectors.

This 2.5-day consultation is taking place in Mbarara, in Uganda’s southwestern region, where the discussions are being interspersed with visits to a ghee processing farm and a cultural dairy centre in addition to a dairy breeding centre and a few dairy farms, milk collection centres and cooperatives and milk processing plants.

This consultation is being organized by CDI, the Netherlands Embassy in Uganda, and local development partners from Agribusiness Initiative (aBi) Trust (a multi-donor entity founded by the governments of Denmark and Uganda), the BMGF-funded East African Dairy Development Project (EADD), GIZ and the Netherlands Development Organisation (SNV).

One thought on “East African dairy: Donors and stakeholders meet this week in Uganda to better coordinate their development work”