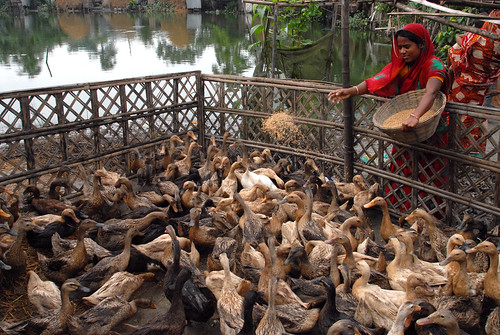 Feeding poultry in Bangladesh (photo on Flickr by WorldFish).

A recent paper that maps the global distributions of the world’s major livestock species has already been used to advance understanding of where surveillance efforts should be targeted to prevent the possible spread of a lethal bird flu virus now circulating in poultry populations in China, where it has killed 62 people. The original mapping work, led by Tim Robinson, of the International Livestock Research Institute (ILRI), and published at the end of May, was immediately put to practical use in locating large regions in South and Southeast Asia that would suit the new lethal virus. Ominously, unlike H5N1, a viral strain of bird flu that has killed millions of poultry and at least 359 humans since its first appearance in 1987, H7N9 does not cause severe illness in the chickens it infects, making it much more difficult to detect, and thus to control.

Here’s the BBC’s James Gallagher on the significance of the bird flu paper that came out in Nature Communications 17 Jun 2014.

‘The “danger zones” in Asia which are vulnerable to a deadly bird flu have been mapped by scientists.

The study, published in Nature Communications, showed parts of Bangladesh, India and Vietnam could easily sustain the virus. The research group said those areas should monitor poultry to ensure any threat is detected.

‘The H7N9 virus spread from birds to people and was first detected in March 2013 in China.

‘New viruses are always a concern because of their unknown potential to spread round the world as a deadly pandemic.

‘Data from the H7N9 outbreak was used to build a computer model of other at-risk areas in Asia.

‘It involved mapping 8,000 live-poultry markets and assessing how close together they needed to be to spread the infection.

The map does not show where the virus will end up next, just those areas where conditions are suitable to sustain the virus if it managed to get there. Bangladesh, northern India, the Mekong and Red River deltas in Vietnam and isolated parts of Indonesia and Philippines were identified as at-risk areas.

‘Thailand was not a risk zone due to cultural differences, which mean live-poultry markets are not common. It is also noticeable that the whole of China is not equally at risk.

H7N9 is not deadly in birds so there is no “body count” to help track the spread of the disease.

‘Dr Tim Robinson, a senior spatial analyst at the International Livestock Research Institute in Nairobi, told the BBC: “It is a risk map showing, if the virus arrived to an area, how likely it would be to spread and continue from there.

H7N9 can spread very quietly throughout the poultry population. The main use of the maps is to target surveillance, I think these maps can show areas where there’s a high chance of the disease flaring up if it arrives.—Tim Robinson . . . .

The work of ILRI’s Tim Robinson is funded by the CGIAR Research Programs on the Humidtropics; Climate Change, Agriculture and Food Security (CCAFS); and Agriculture for Nutrition and Health (A4NH).

Read other news clippings
China Daily
‘The H7N9 bird flu virus, which has caused severe illness and deaths in China, may inhabit only a fraction of its  potential range and could possibly spread to India, Bangladesh, Vietnam, Indonesia and the Philippines, according to a study published in the latest issue of the journal Nature Communications. The emergence and spread of the disease has been linked until now mainly with areas that have a high concentration of markets selling live birds, but it does not appear related to China’s growing number of intensive commercial poultry operations, it found.’

Fast Company
‘A massive global map of where all the cattle, pigs, and other livestock live: As the world’s protein appetite explodes, mapping the world’s 19.6 billion chickens and 1.4 billion cattle will help scientists track disease and pollution hotspots. China has many times the human population of the U.S., and the same is true for pigs: It has 450 million of them, seven times the U.S. population. That’s one of the interesting things you can learn from a new set of maps that show the global distribution of livestock–all 1.4 billion cattle, 1.9 billion sheep and goats, 980 million pigs, and 19.6 billion chickens out there. Did you know that most of Argentina’s land area is given over to cattle? Or that most U.S. chickens live in the south? . . .’

Agence France Presse/Channel NewsAsia
‘Five Asian countries could join China as targets for the H7N9 bird flu virus that has claimed about a hundred lives since it erupted in March 2013, scientists said on Tuesday. . . .’

Science News
‘Avian flu could strike Asian poultry markets outside China, particularly in cities near water, H7N9 influenza could take hold, researchers predict. If it spreads beyond China’s borders, the H7N9 avian influenza virus could take hold in Vietnam’s Mekong and Red River deltas, the Bengal region of India and in parts of the Philippines and Indonesia, a new study predicts. The virus has infected 449 people in China, many of whom had visited live poultry markets. . . .’

Mapping the global distribution of livestock, in PLOS ONE, 29 May 2014, by Timothy Robinson (ILRI), G R William Wint (University of Oxford), Giulia Conchedda (Food and Agriculture Organization of the United Nations [FAO]), Marius Gilbert (Université Libre de Bruxelles) and others.