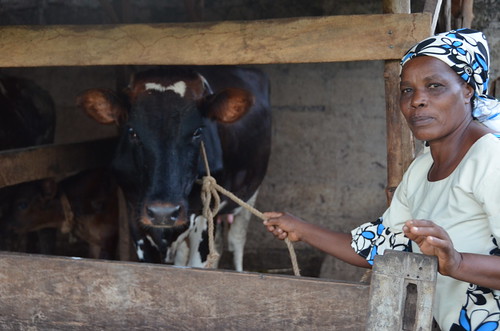 Faustina Akyoo is a dairy farmer in Tanga, Tanzania. Her five dairy cows are an important livelihood  asset for her family  (photo credit: ILRI/Paul Karaimu).

Earlier this year, the Bill & Melinda Gates Foundation provided a grant of USD25.5 million to boost dairy technology uptake in Kenya, Uganda and Tanzania. Given through Heifer International, the grant is being used to implement technology projects under the East African Dairy Development (EADD) project, which aims to support 179,000 families living on 1–5 acre plots and keeping a few dairy cows.

‘More than 200 participants attended the launch of the Tanzanian phase of the project in late March 2014 among them players in the country’s dairy sector, including dairy processors, officials from the Tanzania Dairy Board, dairy farmers, banks and microfinance organisations.

‘The EADD is a regional program led by the Heifer International in partnership with the International Livestock Research institute (ILRI), TechnoServe, the World Agroforestry Centre (ICRAF) and the African Breeder Service Total Cattle Management (ABS-TCM). . . .

‘According to Heifer International, the implementer of the project, the aim is to strengthen relationships between farmers, processers, distributors and consumers in a region where milk demand outstrips supply. . . .

‘During the launch, International Livestock Research Institute (ILRI), which is major EADD partner, was represented by Amos Omore, the ILRI country representative in Tanzania and Edgar Twine, a value chain economist.

And read an earlier article on this topic in an earlier issue of African Farming and Food Processing: Gates Foundation issues US$26mn grant to East African farmers, 30 Jan 2014.