The project is part of the U.S. Government’s Feed the Future Initiative. It is a five-year project in Ethiopia, Ghana and Tanzania aimed at benefiting the region’s farmers by improving effective use of scarce water supplies through interventions in small-scale irrigation.

In his opening remarks, Simon Langan of IWMI argued that by using irrigation well, we can produce more food per unit area even more than rainfed agriculture. He said that this five year project ‘will help farmers move from food insecure to food secure and move from being food secure to being profitable farmers’.

Neville Clarke of Texas A&M explained that the project will identify the constraints facing irrigation and propose ways to reduce those constraints.

Biniam Iyob, water and irrigation advisor at USAID said that a lot of farmers [In Ethiopia] depend on agriculture and most of them are small-scale farmers. He said that irrigation is a big constraint for these farmers and  he explained that the ILSII project has to benefit many of these people. He also mentioned that the FtF program more generally is about increasing the incomes of small scale farmers and making sure that gender is really important aspect in the process, because development is just not about income, it is also about nutrition. It is about women’s’ participation, and environmental protection. Building the capacity of the local partners, individuals from universities and governments is also big part of sustainable development for this country. 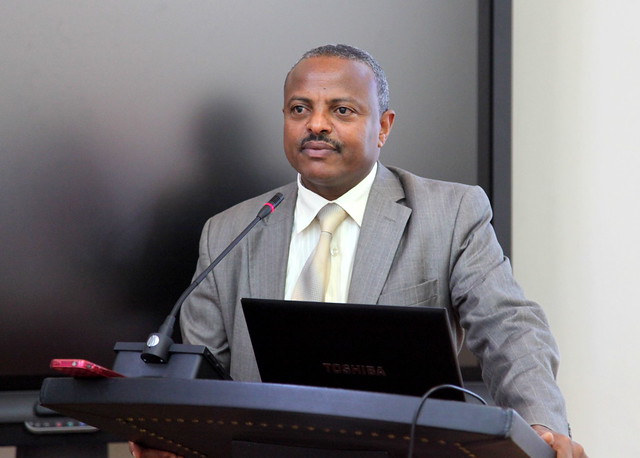 In his remarks, H.E. Ato Sileshi Getahun, State Minister for Natural Resources in the Ministry of Agriculture said that Ethiopian agriculture is mainly based on rainfed system. More than 85% of crop production is from rainfed agriculture and not from irrigation – this only contributes 15–20%.

‘But producing using rainwater alone isn’t becoming promising these days. Global conditions show that production with rainwater alone is not becoming dependable because of climate change.’  He argued that irrigation looks promising as a way to sustain and increase agricultural productivity and production. He emphasized that irrigation should be integrated and connected with land management activities like shade management and natural resource management so the water we use for irrigation itself is sustainable.

He also pointed out various challenges. ‘When considering small scale irrigation and water management, we should also focus on the types of products that are being produced by farmers. The products have to be marketable. The farmers have to get adequate market access as well as the right market to sell their products.’ He said.

‘For Ethiopia, we sometimes are challenged with getting market access for our farmers, particularly in the dry season because, more than 90% of the irrigation is during the dry period. When farmers bring their products to the market, the supply will be high and the demand will be low.’

‘We need to look into market access, infrastructure, value chain and we have to also look into the whole system starting from water availing, producing, bringing to the market, agro processing and look into how much the farmer is getting and putting in its own pocket.’

‘I hope this is a project that looks into this whole value chain. We need technologies that are identified, generated and transferred to the farmers with the help of ILSSI project researchers. We also need our farmers, middlemen, practitioners, and experts to be involved because they are the ones actually in disposal of creating those capacities and skills.’

He concluded: ‘Your discussion in this meeting have to be considered in such a way that you are building a football team. We all have a common agenda, our common agenda is to feed the future, that is, on small-scale irrigation. We have a defender, midfielder, offensive and goalkeeper, if one is not performing well, then it damages the whole team. The result of the team is scoring a goal, if the goal is scored and the team wins, the advantage will be for the whole team. If part of the team who are working in this initiative fails somewhere, then the project will not be successful. The success lies in working with team for the betterment and for the common goal we have.’