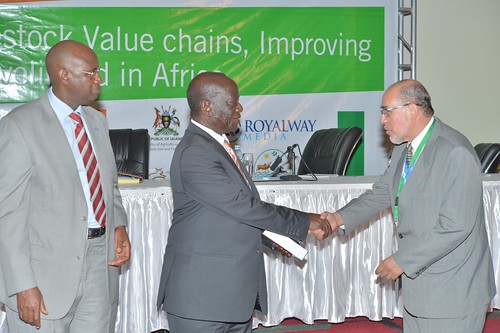 Article by Danilo Pezo, ILRI country representative in Uganda, and Evelyn Katingi, communications officer for the CGIAR Research Program on Livestock and Fish

The International Livestock Research Institute (ILRI) participated actively in the African Livestock Conference and Exhibition (ALiCE2014), the theme of which was ‘Developing livestock value chains and improving livelihood in Africa‘, held at the Speke Resort & Conference Centre, in Kampala, Uganda, 18–20 June 2014.

Members of ILRI’s office in Uganda served on the conference’s hosting committee, which was led by Nicholas Kauta, director of Animal Resources of the Ministry of Agriculture, Animal Industries and Fisheries (MAAIF). The opening speech and inauguration of the conference were made by Edward Kiwanuka Ssekandi, vice president of Uganda, who was also the conference’s guest of honour.

Key messages delivered by ILRI’s Pezo
• In 2030, demand for animal-source foods in sub-Saharan Africa will double that of 2000
• While monogastric production (pigs and poultry) in Africa is in rapid transition to industrial systems, at least 30% of pig production will remain in smallholder hands by 2015
• Smallholder mixed crop-and-livestock farmers are competitive:
> 90% of pig production in Uganda is made by smallholders (there are great opportunities for increasing pig productivity if diseases such as Africa swine fever are better controlled and farmers gain better access to technology and market information)
> 1 million smallholders in Kenya keep Africa’s largest dairy herd 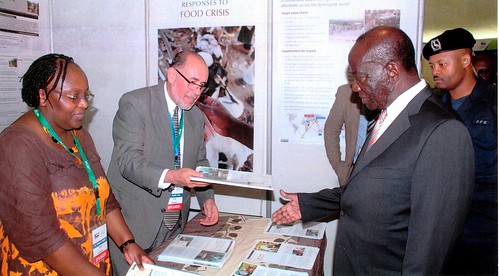 ILRI’s Tony Brenton-Rule, head of business development, and Azage Tegegne, manager of the ILRI-led Livestock and Irrigation Value Chains for Ethiopian Smallholders project, also participated in ALICE 2014 and were at hand to answer questions from visitors to ILRI’s exhibit.