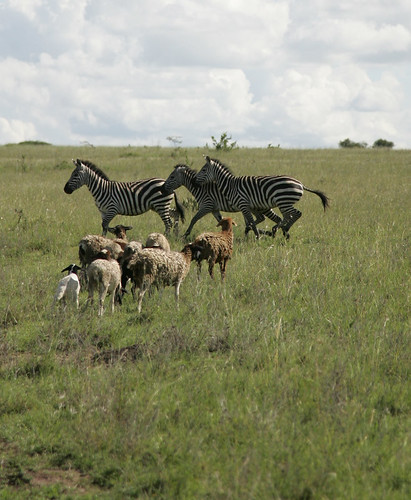 Wildlife and livestock still share the rangelands of Kitengela, on the outskirts of Nairobi, Kenya (photo credit: ILRI/Stevie Mann).

‘”Rapid large-scale land use changes, poaching, climate change, rising population pressures, governance, policy, economic and socio-cultural transformations and competition with livestock all contribute to the declines in abundance,” lead researcher Dr Joseph Ogutu of the University of Hohenheim, Institute for Crop Science, Stuttgart, Germany said at the release of a report.

‘Ogutu observed the population dynamics of 15 wildlife and four livestock species monitored using aerial surveys from 1977 to 2011 within Kajiado County of Kenya, with a rapidly expanding human population, settlements, cultivation and other developments show a major decline of wildlife.

“The abundance of the 14 most common wildlife species declined by 67 percent between 1977 and 2011 in both Eastern (Amboseli Ecosystem) and Western Kajiado,” he added. . . .

‘The distribution of wildlife contracted dramatically during 1977–2011, most especially for wildebeest, giraffe and impala.

They observed the future of wildlife populations on the pastoral lands of Kenya critically depends on the good will and support of the local communities who continue to tolerate wildlife on their lands despite the huge costs they incur.’

Acknowledgements
The study was conducted by scientists from the University of Hohenheim’s Institute for Crop Science, in Stuttgart, Germany; the School of Animal, Plant and Environmental Sciences at the University of the Witwatersrand, in South Africa; the International Livestock Research Institute (ILRI), in Nairobi, Kenya; the Natural Resource Ecology Laboratory and Department of Ecosystem Science and Sustainability at Colorado State University, in the US; and the African Wildlife Foundation, Wildlife Direct and the Kenya Wildlife Service, all in Kenya.