All artwork on this page by Bill Traylor.

Maria Teresa Correa, an epidemiologist and public health professor at North Carolina State University, and Delia Grace, a veterinary epidemiologist and food safety scientist at the International Livestock Research Institute (ILRI), have an interesting chapter on an interesting subject — Slum livestock agriculture — published in the Encyclopedia of Agriculture and Food Systems (2014).

Chapter abstract
‘Slums are unplanned squatter human settlements in peri-urban and urban areas where more than 800 million people live. These densely populated areas lack basic public services. Livestock raised in these conditions compete with humans for space and water, and pose a risk to human and animal health. Notwithstanding the risk of disease transmission, slum livestock agriculture plays an essential role in the livelihoods of people and deserves consideration in urban planning and policy making.’ 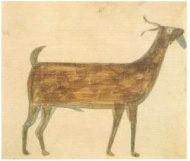 Below are some of the arresting facts and figures authors Correa and Grace present (these bullets were edited and condensed for Twitter).

Chickens and pigs are favoured in Latin America slums, goats and rabbits in Africa and Southeast Asia, cows in India and Nepal.