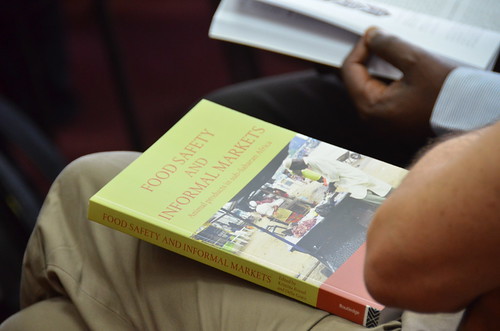 ‘. . . According to studies by scientists from the International Livestock Research Institute (ILRI), informal markets . . . provide essential sources of food and income for millions of poor, with milk and meat that is often safer than supermarkets.

Blunt crack-downs on informal milk and meat sellers that are a critical source of food and income for millions of people are not the solution,” Delia Grace, ILRI’s program leader for food Safety and Zoonoses, said during the launch of the study in Nairobi on Tuesday.

‘She warned that the push for greater food safety standards in these markets must be informed by an understanding of their vital role as a provider of food and income to several hundred million people who rank among the world’s poorest.

‘The study probes the complicated world of traditional or informal markets in livestock products. Grace noted that misguided efforts to control the alarming burden of food-related illnesses in low-income countries risk intensifying malnutrition and poverty while doing little to improve food safety.

‘She said the study that was done in eight countries in Africa cautioned against the adoption of solutions developed in wealthy countries that favor large commercial operations over small producers. . . .

Grace said the studies in East and Southern Africa found that, due to a poorly patrolled chain of custody between producer and seller, milk and meat sold in supermarkets may pose a greater health threat than what is sold in traditional markets.

‘In most developing countries, more than 80 percent of livestock product purchases occur through informal markets and in places where there is no “formal” alternative, like a western-style supermarket. . . .

We need to understand how much disease is caused by unsafe milk and meat in low-income countries and also how much they contribute in terms of nutrition and income,” said Kristina Roesel, a researcher at ILRI. . . .

‘Milk, meat, fish and fresh vegetables are common carriers of disease-causing pathogens. But at the same time, these foods are essential for maintaining health and proper childhood development.

‘Moreover, around the world, around one billion smallholder farmers rely on livestock for their livelihoods, with sales of milk and meat through informal markets providing much needed income.

‘The researchers appealed to policy makers in Africa to look to the facts, not just the fears, before moving to curtail meat sales at the local wet market or purchases of unpasteurized milk from traditional street vendors.’

About ILRI
The International Livestock Research Institute (ILRI) works with partners worldwide to improve food and nutritional security and to reduce poverty in developing countries through research on efficient, safe and sustainable use of livestock—ensuring better lives through livestock . The products generated by ILRI and its partners help people in developing countries enhance their livestock-dependent livelihoods, health and environments. ILRI is a member of the CGIAR Consortium of 15 research centres working for a food-secure future. ILRI has its headquarters in Nairobi, Kenya, a second principal campus in Addis Ababa, Ethiopia, and other offices in Southern and West Africa and South, Southeast and East Asia. http://www.ilri.org

About A4NH
The CGIAR Research Program on Agriculture for Nutrition and Health (A4NH) helps realize the potential of agricultural development to deliver gender-equitable health and nutritional benefits to the poor. This program is led by the International Food Policy Research Institute (IFPRI). a4nh.cgiar.org