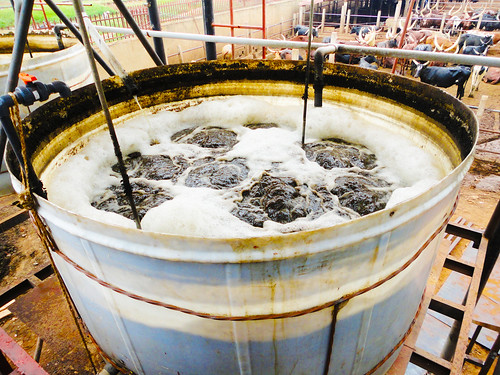 An article in the Thompson Reuters Foundation website this month (2 Feb 2015), explains how an initiative by the Bio-resources Innovations Network for Eastern Africa (Bio-Innovate) Program is helping Uganda’s Kampala city abattoir generate power from biogas to meet its energy needs while conserving the environment.

The initiative is part of a wider eastern Africa project by Bio-Innovate, which is hosted and managed by the International Livestock Research Institute (ILRI), that is aiming ‘to provide training and technology to agricultural factories to help them generate their own power, save on electricity and cut down on climate-changing emissions.’

Funded by the Swedish International Development Cooperation Agency (Sida), the project is carrying out work to turn waste into biogas in Ethiopia, Tanzania and Uganda.

The Kampala facility uses the biogas it produces to power its generator by ‘putting its waste and wastewater through a fermentation process that releases methane, which is then captured and burned to produce electricity.’

‘”We are generating on average about 10 to 15 cubic metres of biogas daily,” said Joseph Kyambadde, head of biochemistry at Makerere University and one of those involved with the project.’

According to the article, the electricity generated through this process runs ’15 security lights, 15 deep freezers and 15 refrigerators at the abattoir, helping save around 8 million Ugandan shillings ($2,800) per month,’ which translates to significant cost savings for Uganda’s largest slaughterhouse.

According to Allan Liavoga, manager of the Bio-Innovate project, USD 275,000 in Sida funding will be used to replicate the project across Uganda.

Scaling up of the biogas project to other parts of the country could allow Ugandans who live far from the power grid to generate their own energy.