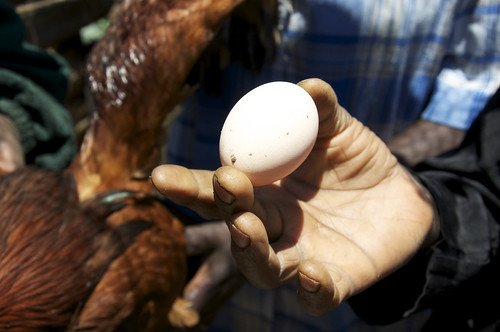 A 5 Feb 2015 article in the Arizona State University’s Biodesign Institute website describes how success from a project that is helping Ugandan farmers improve their chickens is inspiring a new five-year project, led by the International Livestock Research Institute (ILRI), to improve chicken breeds in Ethiopia, Nigeria and Tanzania.

The article says Jagdev Sharma, a researcher at the American university ‘has been working to enhance the power of poultry in Uganda’ by introducing into the country a ‘hybrid chicken from India known as a Kuroiler, which has ‘outperform[ed] indigenous varieties, [and is] providing more meat and eggs under rural scavenging conditions.’

As a result, the chicken breed has become very popular in the country and is giving hope to many village families where ‘chickens represent an efficient and sustainable resource, helping villagers meet increasing food demands, as well as providing rural women with a source of income, improving their social standing and overall quality of life.’

Kuroiler chicken, which closely resemble indigenous chickens, have been thriving in village flocks in India for over 15 years. They produce five times the number of eggs per year (150-200) and attain almost twice the body weight (3.5 kg) in less than half the time of indigenous backyard chickens. According to the report, ‘indigenous Ugandan hens produce just 20 to 40 eggs per year, with a typical male chicken weighing in at around 1.5 to 2 kg after nine to 12 months of growth.’

By mid 2014, nearly half a million Kuroilers had been distributed to rural farmers in Uganda.

As a result of the success of the Kuroiler chickens in Uganda, ‘the Bill and Melinda Gates Foundation [has] approved a $1.4 million supplement to fund the project through spring 2016, to support ‘efficient breeding and distribution of the chickens across Uganda and to make the project ‘self-sustaining’.

‘Drawing on the success of the Ugandan example,’ the article says, ‘the Gates Foundation is additionally funding a comprehensive, $11 million plan, headquartered at ILRI in Kenya,’ to improve chickens in other parts of Africa. The five-year project will compare the performance of Kuroilers with native chicken breeds in Ethiopia, Nigeria and Tanzania.