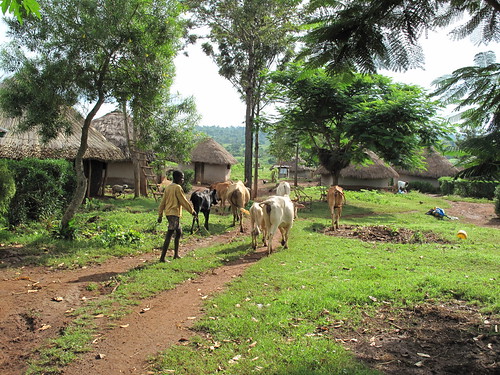 ILRI-Wellcome projects have investigated the disease pathogens circulating in both people and animals in the communities outside the border town of Busia, Kenya, where smallholders mix crop growing with livestock raising (photo credit: ILRI/Pye-Smith).

Voice of America’s Joe DeCapua interview Phil Toye, a scientist with the International Livestock Research Institute (ILRI), about a paper published this week in Science Advance.

‘East Coast fever kills one cow every 30 seconds in Africa, causing 300 million dollars in annual losses. But a new discovery could lead to an effective and much cheaper way to prevent the disease by pitting one form of parasite against another.

‘Philip Toye said, “East Coast fever is a major burden for millions of poor people in Africa whose existence depends on healthy cattle.”

‘It’s restricted to east, central and southern Africa. And in those countries it’s the most important constraint to livestock productivity. It affects particularly the better breeds of cattle. It’s a lethal disease. It can kill up to 90-95 percent of a susceptible herd. And death usually occurs in about two to three weeks.’—Phil Toye

‘Toye, a principal scientist at ILRI, the Nairobi-based International Livestock Research Institute, said the parasitic disease is spread by ticks and has “devastating consequences if not controlled.”

‘He said, “The means of control at the moment – pesticides – just to reduce the tick burden – is expensive and it requires continual application. And, of course, there are also environmental effects there.”

‘Currently, cattle can be inoculated against East Coast fever. It’s been shown to reduce calf mortality in some areas from about 50 percent to less than three percent.

‘Toye said,”There is a vaccine available, which involves inoculating essentially the live parasite, but at the same time giving a long-acting antibiotic, which means the animal experiences the infection, but not the disease to any great extent. But they do develop a very strong immunity to the disease. So, it’s a very effective vaccine. It’s very safe when administered correctly, but it’s complex to produce and it is expensive.” . . .

‘The potential new prevention method is based on a study of co-infections done in Western Kenya. . . .

‘They discovered that the co-existence of parasites in calves appears to be a good thing in the East Coast fever zone.

‘“The most important pathogen out in that area is Theileria parva, which causes East Coast Fever. If calves were infected at the same time as they got Theileria parva with a related organism called Theileria mutans or Theileria valifera – these so-called low pathogenic Theileria – then the odds of their dying of East Coast fever was significantly reduced. And that’s the basis of the paper, which is being published,” he said. . . .

‘Some speculate the findings could be applied to other parasitic diseases, including malaria. Two parasites cause malaria, but one – Plasmodium falciparum – is much more deadly than the other – Plasmodium vivax. A 1996 study suggests that people in the South Pacific, who have a genetic mutation making them susceptible to the less deadly parasite, may be protected against Plasmodium falciparum.’

Read the whole article, and listen to the interview by Joe DeCapua on Voice of America: Co-infections may protect cattle,  20 Mar 2015.

One thought on “ILRI’s Philip Toye VOA interview on East Coast fever, and the benefits of co-parasitic infections”