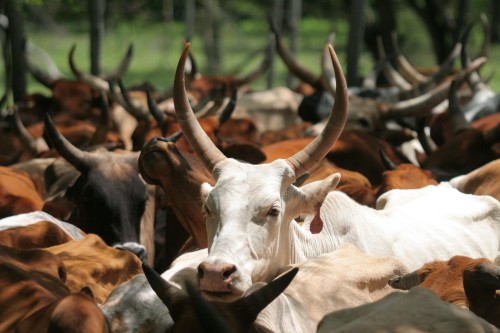 ‘Herds of African cattle may hold the secret to new ways of fighting parasitic diseases like malaria, which kills some 600,000 people a year, scientists said on Friday.

‘The researchers from the University of Edinburgh found that cows are protected from a parasite that causes a deadly disease called East Coast [f]ever if they have previously been infected with a closely-related but milder species of the parasite.

‘This discovery, they said, suggests that “fighting fire with fire” is a strategy that might work against a range of parasitic diseases, including severe malarial infection in people.

‘”Our results suggest seeking a simple vaccine that could protect cows from East Coast fever by inoculating them with a related but far less harmful parasite,” said Mark Woolhouse, who led the study with a team from several other universities and the International Livestock Research Institute.

‘”A similar process might be at work in malaria, where infection with the less harmful Plasmodium vivax parasite may protect people from the Plasmodium falciparum parasite.”. . .

For their study, Woolhouse’s team tracked the health of 500 Kenyan calves from birth to one year old, building up data on the cattle’s survival, growth, health and infections with viruses, bacteria, worms and tick-borne parasites.

They found that deaths caused by East Coast [f]ever, the biggest killer of East African cattle, dropped 89 per cent among calves which were also infected with other species of parasite that do not cause disease.

‘Something similar may occur when people are infected with the more deadly parasite P. falciparum at the same time as the less aggressive P. vivax, making them more likely to survive the disease. . . .’

Read the paper in Science Advances: Co-infections determine patterns of mortality in a population exposed to parasite infection, 20 Mar 2015.

Abstract
Many individual hosts are infected with multiple parasite species, and this may increase or decrease the pathogenicity of the infections. This phenomenon is termed heterologous reactivity and is potentially an important determinant of both patterns of morbidity and mortality and of the impact of disease control measures at the population level. Using infections with Theileria parva (a tick-borne protozoan, related to Plasmodium) in indigenous African cattle [where it causes East Coast fever (ECF)] as a model system, we obtain the first quantitative estimate of the effects of heterologous reactivity for any parasitic disease. In individual calves, concurrent co-infection with less pathogenic species of Theileria resulted in an 89% reduction in mortality associated with T. parva infection. Across our study population, this corresponds to a net reduction in mortality due to ECF of greater than 40%. Using a mathematical model, we demonstrate that this degree of heterologous protection provides a unifying explanation for apparently disparate epidemiological patterns: variable disease-induced mortality rates, age-mortality profiles, weak correlations between the incidence of infection and disease (known as endemic stability), and poor efficacy of interventions that reduce exposure to multiple parasite species. These findings can be generalized to many other infectious diseases, including human malaria, and illustrate how co-infections can play a key role in determining population-level patterns of morbidity and mortality due to parasite infections.

Acknowledgements
Researchers from the Universities of Edinburgh, Glasgow, Pretoria and Nottingham, the Roslin Institute and the ILRI contributed to the study, which was funded by the Wellcome Trust.

Read other news clippings on this paper
When two parasites are better than one: (Unusual) insights into ways to combat human parasitic diseases, 30 Mar 2015
New paper on parasitic infections shows the benefits of co-infections with the ‘mild cousins’ of important pathogens, 21 Mar 2015
ILRI’s Philip Toye VOA interview on East Coast fever, and the benefits of co-parasitic infections, 21 Mar 2015