The March-April issue of ‘Livestock Matter(s)’ provides a round-up of livestock development news, publications, presentations, images and upcoming events from the International Livestock Research Institute (ILRI) and its partners. Download a print version or sign up to get Livestock Matter(s) in your mailbox each month.

WILD ‘Women in Livestock Development’ on top
In March, we celebrated promotions, of female staff members, made in the last year at the International Livestock Research Institute (ILRI) in honour of International Women’s Day 2015.

Food scares: Agrifood systems need greater cooperation and investments in safer foods and farming
Delia Grace, a veterinary epidemiologist and food safety expert at ILRI and and John McDermott, a former deputy director general for research at ILRI who now directs the CGIAR Research Program on Agriculture for Nutrition and Health, contributed a chapter in the recently launched 2014–2015 Global Food Policy Report, which was published by the International Food Policy Research Institute.

First global map of the rising use of antimicrobial drugs in farm animals published in PNAS
Tim Robinson a researcher at ILRI contributed to a paper published in the Proceedings of the National Academy of Science (PNAS) on Global trends in antimicrobial use in food animals, which says worldwide antimicrobial consumption is expected to rise by a staggering 67% between 2010 and 2030, which is likely to cause poor people, including those that keep livestock, to suffer a disproportionately high share of the adverse effects of high microbial use in farm animals.

New study shows co-parasitic infections of cattle protect the animals from lethal disease
African cattle infected with a lethal parasite that kills one million cows per year are less likely to die when co-infected with the parasite’s milder cousin, according to a new study published in Science Advances. These findings are from a a study, Co-infections determine patterns of mortality in a population exposed to parasite infections that was part of an Infectious Diseases of East African Livestock (IDEAL) project, a multi-partner study that includes ILRI. The project followed more than 500 indigenous East African shorthorn zebu calves during their first year of life.

New paper explodes a ‘breadbasket’ myth of African food production
An opinion piece in This Is Africa, an online publication of the Financial Times (UK), by Timothy Searchinger, a research scholar at Princeton University and Philip Thornton, leader of a Policies and Institutions flagship program of the CGIAR Research Program on Climate Change, Agriculture and Food Security (CCAFS) and a senior researcher with ILRI says ‘Africa could be on the brink of an agricultural revolution. Political commitment to the sector is thankfully gaining momentum as an effective route to bring African populations out of hunger and poverty.’

Livestock and Fish program holds virtual review and planning meeting
In late-March, the CGIAR Research Program on Livestock and Fish held a virtual review and planning meeting to take stock of progress since 2012, examine the wider science and development environment and devise plans and deliverables for the coming years. The discussions were organized around each of the five research and technology ‘flagships’ of the program, examining strengths, weaknesses and desired results.

Solution-oriented action research: Scaling MilkIT dairy feed innovations in India
In last year’s MilkIT project (Enhancing dairy-based livelihoods in India and Tanzania through feed innovation and value chain development approaches) workshops in Tanzania, we caught up with two Indian participants who had been invited in their roles as significant stakeholders in dairy development in the state of Uttarakhand. Conversations revealed they planned to take up several innovations and products of the project.

Australian envoy to Kenya visits BecA-ILRI Hub
The Head of Mission at the Australian High Commission in Kenya, HE John Feakes visited ILRI on 11 March 2015 to acquaint himself with various agricultural research programs funded by the Australian Government through the partnership between BecA-ILRI Hub and Australia’s national science agency, CSIRO.

New series of articles on adaptation and resilience in drylands
In April, the ILRI Livestock Systems and Environment (LSE) blog, started a series of articles, published every week (Thursdays), featuring newly-published work on adaptation and resilience research in drylands. Writers in the series include ILRI’s Lance Robinson, Mike Jones, who leads the Resilience Thematic Group at the International Union for Conservation of Nature (IUCN) and Annette Cowie, a principal research scientist, Climate in NSW Department of Primary Industries.

Time to prioritize: Africa RISING West Africa partners make plans for 2015
A review and planning meeting of the Africa RISING West Africa project ended on 25 March 2015 in Accra, Ghana with partners committing to greater integration of research activities in 2015. The two-day meeting focused on taking stock of 2014 achievements, planning research activities for the approaching field season in Ghana and Mali and addressing project implementation challenges cited in a November 2014 report of the mid-term external review of the project.

Extending the use of social and multimedia in Somaliland’s IGAD Sheikh Technical and Veterinary School
In March, ILRI’s Communications and Knowledge Management (CKM) team led a five-day communications and knowledge sharing training workshop with research and teaching staff at the IGAD Sheikh Technical Veterinary School and Reference Centre (ISTVS) in Somaliland.

Making a living from mobile beekeeping in Tigray: Mileat Gebrehiwot’s story
This is the story of beekeeping as observed in Wurko town in Tigray, northern Ethiopia. Mileat Gebrehiwot, a young woman who just completed high school education and has had no formal training in beekeeping, is managing 80 beehives in about 1,600 m2 of land and her colony management strategy is completely based on moving the beehives seasonally.

IGAD’s Horn of Africa, Nile Valley and Great Lakes region member states sign agreement for joint work with ILRI
The Intergovernmental Authority on Development (IGAD), an eight-country trade bloc in Africa including governments from the Horn of Africa, the Nile Valley and the African Great Lakes region signed a memorandum of understanding with ILRI on 27 March 2015. The memorandum establishes and defines a framework for cooperation and strengthens the IGAD-ILRI research and development work in the IGAD member states: Djibouti, Eritrea, Ethiopia, Kenya, Somalia, South Sudan, Sudan and Uganda.

Cattle parasite study points to possible way to fight malaria
Herds of African cattle may hold the secret to new ways of fighting parasitic diseases like malaria, which kills some 600,000 people a year. ‘Our results suggest seeking a simple vaccine that could protect cows from East Coast fever by inoculating them with a related but far less harmful parasite,’ said Mark Woolhouse, who led the study with a team from the University of Edinburgh, several other universities and ILRI.

Feeding Africa’s livestock: Fodder and forage solutions
The forecasted doubling of demand for meat and milk in developing countries in the next two decades offers significant opportunities for livestock producers. However, the availability of – and access to – quality fodder and livestock feed remains an important constraint. ILRI is collaborating with the Napier grass breeding program of EMBRAPA, the Brazilian agricultural research corporation, to develop improved lines that are disease resistant and have high nutritional value.

CGIAR news-updates from research programs we work in

Uganda pig value chain project partners with private sector to boost access to advisory services
The Smallholder Pig Value Chain Development (SPVCD) in Uganda project, which is led by ILRI, has established partnerships with private sector organizations to offer advisory services through trainings for pig farmers in Uganda. In February 2015, ILRI collaborated with Pig Production and Marketing Uganda Limited on a training workshop on piggery management for small and medium-scale farmers. 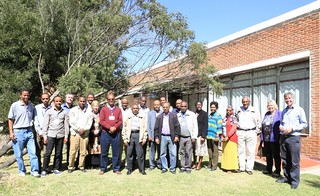 Humidtropics program launches research-for-development platform in Ethiopia
The CGIAR Research Program on Integrated Systems for the Humid Tropics (Humidtropics) Ethiopia Action Site R4D Platform was launched on 5 February 2015 at the ILRI campus in Addis Ababa. The platform is designed to oversee, and link with, the local level innovation platforms at field sites for co-learning and guiding Humidtropics integrated research for development activities in the country.

Using social media to communicate research: Experiences of the International Livestock Research Institute
In this issue we feature a presentation given by Tezira Lore, a communication specialist at ILRI, at the Agri-biotechnology and Biosafety Communications Conference (ABBC 2015), Nairobi, Kenya 13-14 April 2015.

A photofilm from a communication and knowledge sharing workshop at the IGAD Sheikh Technical Veterinary School and Reference Centre in Somaliland from 15-19 March 2015.

This issue features photos of  a ‘Farmers’ Horticultural Day’ that brought together farmers’ organizations and other key stakeholders dealing with horticultural activities to exchange experiences and ideas on how to support smallholder horticulture development in Ethiopia. 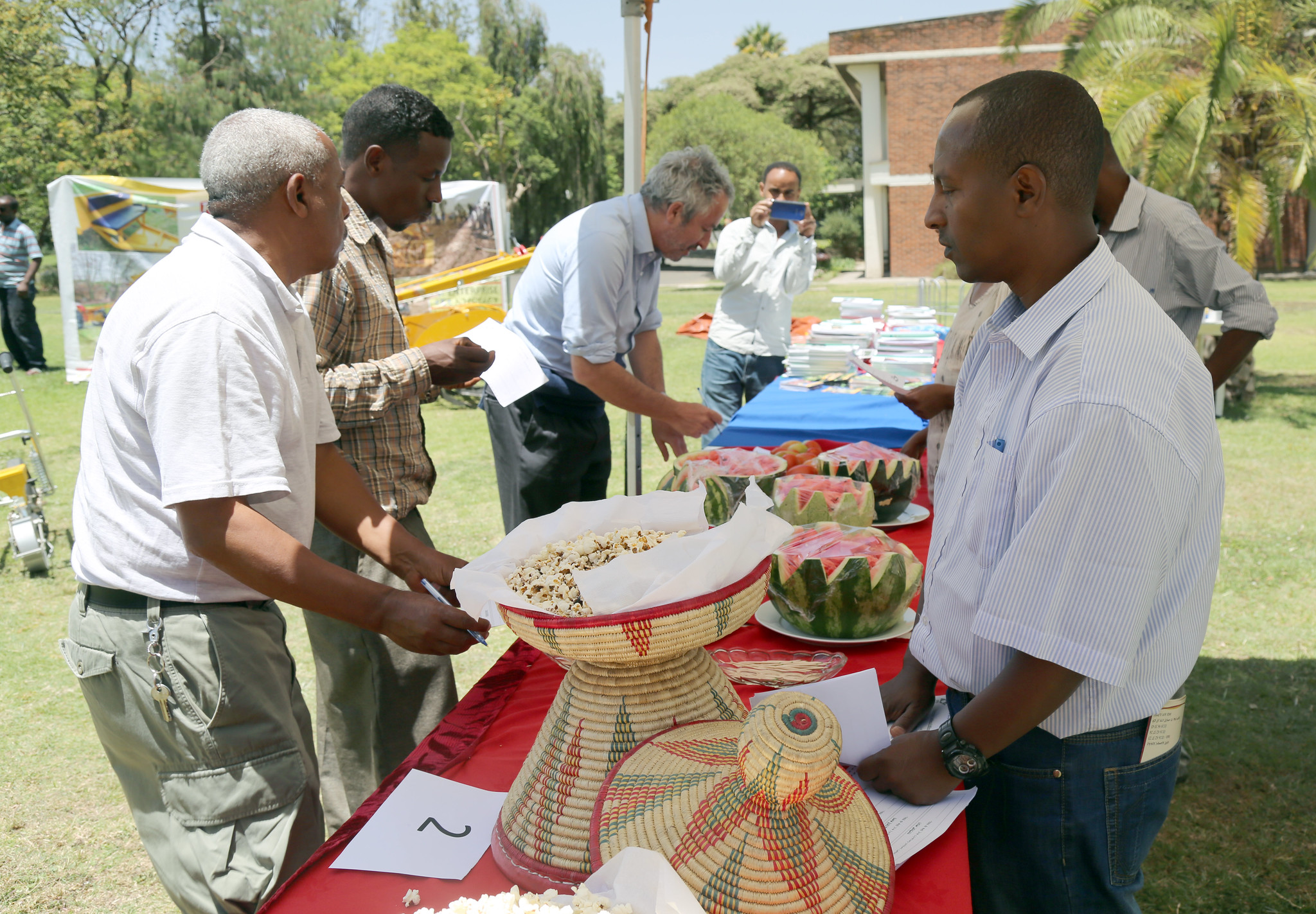 In March and April we welcomed the following staff:

We said goodbye to: