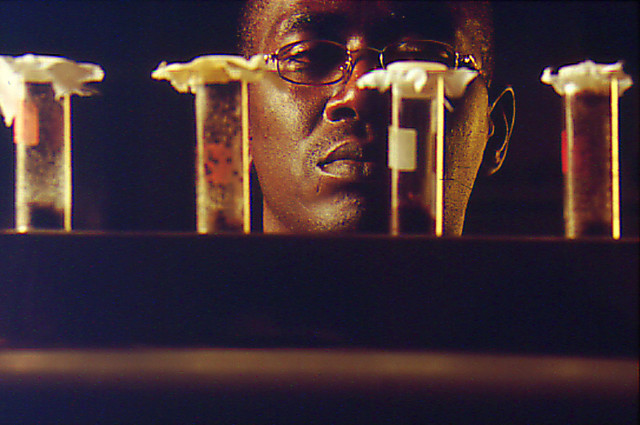 ‘. . . In Africa there are over 650 tick species. . . .The most damaging effect of ticks . . .  is their ability to transmit diseases, some of which can be fatal to the host. Four groups of tick-borne diseases (TBD) are of importance to the livestock industry: anaplasmosis, babesiosis, cowdriosis and theileriosis. In Africa, all four of these types of disease pose a threat to livestock production. . . .

‘The most widely used method for the effective control of ticks is the direct application of acaricides (pesticides that kill members of the arachnid subclass Acari) to host animals, usually using a dip tank. However acaricides are expensive and can be detrimental to the environment. . . .

‘One particularly devastating tick-borne disease is East Coast Fever, caused by the protozoan parasite, Theileria parva. East Coast fever disease is the single biggest killer of cattle in 11 countries in Eastern and parts of Central Africa and it is widely regarded as the most serious animal health constraint to increasing the productivity of cattle in eastern, southern and central Africa — mostly because the disease causes high mortality (greater than 80%) in susceptible cattle populations, with the more productive European and improved zebu breeds being particularly susceptible.

‘A “live” vaccine that protects cattle in Africa against East Coast fever has been developed . . . .

‘However, . . . production of the live East Coast fever vaccine is complicated, time-consuming and expensive. To produce one million doses of vaccine requires 130 cattle that have not previously been exposed to the disease, 500 rabbits and at least 600,000 ticks.

The entire process of making the batch takes up to 18 months. The product then requires a cold chain and careful handling to deliver it and have it administered by trained veterinarians on farms and ranches.

‘. . . The last challenge however will be getting this vaccine to the people who need to access it most, where significant barriers exist in terms of access, cost and administrating the vaccine.’

Read the whole article by Samantha Spooner (@samooner) at The Mail & Guardian Africa (@MandGAfrica): They kill one cow every 30 seconds in Africa, but you’ve probably never given them much thought, 11 May 2015.