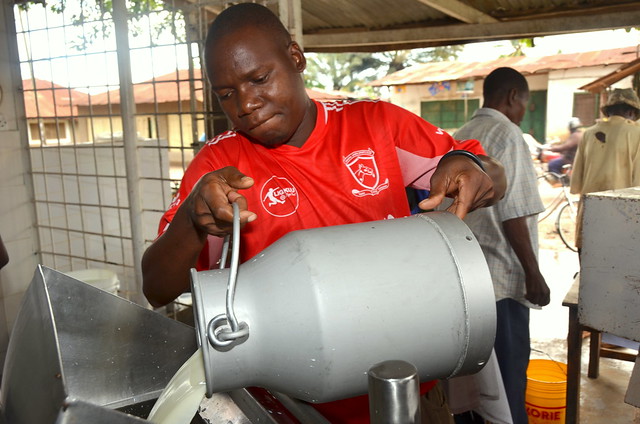 A recent study by Sokoine University of Agriculture (SUA) shows that only 30% of the capacity of milk processing plants is utilized in Tanzania and per capita milk consumption in the country is a mere quarter of the global milk consumption standard.

‘Milk production in the country needs to go up to nine billion litres per year in order to catch up with global standards,’ says George Msalya, a senior lecturer at SUA, in an article published 8 Jun 2015 by The Citizen in Tanzania.

Sokoine University is a partner the Maziwa Zaidi program in Tanzania and has been actively involved in several projects under the program such as the Irish Aid-funded More Milk in Tanzania (MoreMilkiT) project that is led by the International Livestock Research Institute (ILRI).

MoreMilkiT is a four year project that is improving dairy-dependent livelihoods through generation of research evidence and piloting of interventions starting with pilot sites in Tanga and Morogoro. The project is reaching nearly 4,800 farmers though its dairy market hub approach which connects dairy producers and value chain actors to improve milk production and commercializing in the country.

According to Msalya, milk production in Tanzania can be boosted by ‘addressing chronic problems facing milk production and marketing such as of low output and compromised quality.’

The Maziwa Zaidi program is working with stakeholders including the government to support the dairy sector in building a sound dairy value chain, which includes activities of pastoralists, milk consumers, processors, distributors, traders, researchers and policymakers.

Read the full article: Milk production ‘too low’ in The Citizen.