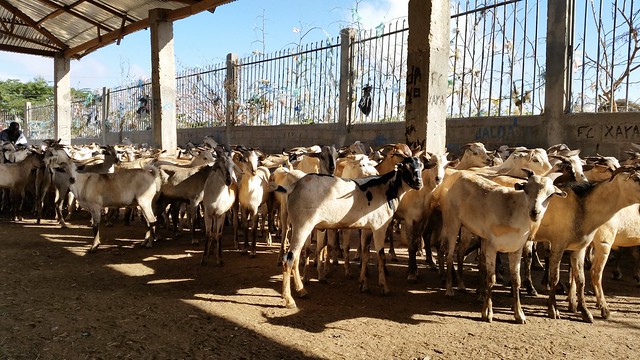 Goats at a market in Somaliland (photo credit: ILRI/Peter Ballantyne).

The livestock sector is a major source of livelihood in many Somaliland households. Exports of sheep and goats, particularly to the Middle East, experienced tremendous growth between 2007-2012, but despite the opportunities for producers and traders offered by this growth, livestock trade is characterized by underdeveloped legal frameworks, transactional uncertainty and high information costs. Traditional institutions and religious practices guide the livestock trade in Somaliland.

In 2007, Terra Nuova set up the LMIS to address high market information cost in the state. This LMIS activity and the analysis of its data were conducted as part of a ‘Reducing vulnerability of Somali communities by raising the capacity of indigenous systems and enhancing market access and consumer welfare’ project in Somaliland, which is funded by the Danish International Development Agency (Danida) and implemented by the International Livestock Research Institute (ILRI) and Terra Nuova.

Francis Wanyoike, a researcher with ILRI’s Policy, Trade and Value chains (PTVC) program, together with colleagues Lawrence Godiah, Riccardo Costagli and Ibrahim Gulaid from Terra Nuova, Derek Baker from University of New England and Ibrahim Elmi from the Somaliland Chamber of Commerce, Industry and Agriculture, evaluated the validity of the LMIS including information reported on numbers of animal exports, market turnover volumes, market prices for animals of different grades and analyzed the strengths and weaknesses inherent in the livestock marketing information system.

According to the brief, analysis of the data from LMIS revealed that:

The authors say ‘the Somaliland government needs to diversify its export markets and product portfolio to stabilize the livestock export trade sector.’

Download the ‘Enhancing the provision of livestock marketing information in Somaliland‘ brief.