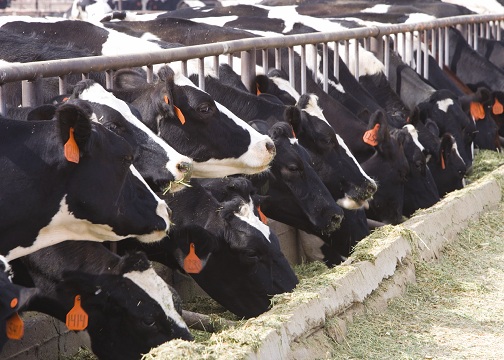 There’s been an interesting debate published in the Wall Street Journal this week on whether feedlot beef is bad for the environment. Robert Martin, director of the Food System Policy Program at the Johns Hopkins Center for a Livable Future, says the pollution spreads for miles. Jude Capper, a livestock sustainability expert based in Britain, says the beef industry keeps things safe

‘Feedlots play a huge but controversial role in the raising of beef cattle in the U.S., which produced an estimated 24.3 billion pounds of beef last year, down slightly from an average of 26 billion for the previous five years.

‘The overwhelming majority of beef cattle spend their last months with hundreds if not thousands of other cows in feedlots, where they are fattened before being slaughtered.

‘But while feedlots help provide large amounts of protein in Americans’ diets, there are growing concerns about what they also do to the environment. Feedlots concentrate animal waste and other hazardous substances that can pollute the air and the water with their runoff. Finishing cattle in this way also consumes huge amounts of grain and water.

‘The industry is regulated and says it follows environmental safety standards. But critics see a system that must be reformed.

‘Robert Martin, director of the Food System Policy Program at the Johns Hopkins Center for a Livable Future, says beef feedlots spread pollution for miles. Jude Capper, a livestock-sustainability consultant based in Britain who has worked with animal-health organizations and meat-industry groups, says feedlots are an efficient use of resources.

‘In the industrial model today, animals are segregated from the crop-production cycle. Their waste, once a benefit, is now an environmental hazard because of its enormous volumes and concentrations. . . .

‘While “Big Meat” projects an image of traditional farmers, people are increasingly aware that the industrial production of meat—which requires vast amounts of grain and water—affects their health and hurts the environment. . . .

‘An exorbitant amount of water is required to produce the grain for feedlots. . . .’

I believe that we should eat safe, affordable, high-quality food
that minimizes negative impacts on the environment.
Feedlot beef is my choice for my family.

‘Feedlot cattle spend 70% to 80% of their lives on pasture, and only the last four or five months in a feedlot, where they eat grains, legumes, forage and byproducts from human feed and fiber production. . . . A feedlot is not utopia, but neither is a grass pasture in the midst of a six-month drought. . . .

‘[F]eedlot beef is not a waste of water. Cereal crops use less water per pound, but they don’t provide the same range of nutrients as beef, nor can they be produced on low-quality pasture and rangeland. Claims, meanwhile, that 70% of U.S. corn production goes to feeding livestock are wildly inaccurate, as are estimates based on that figure of how much water is used in raising feedlot cattle. Only 9% of total U.S. corn production last year was grown for beef cattle feed. . . .

‘Sustainable food production means making the best use of resources, including raising beef cattle in the most efficient manner. That means raising the animals in pastures and finishing them in feedlots.’

Read the whole exchange, Is feedlot beef bad for the environment? in the Wall Street Journal, 12 Jul 2015.

3 thoughts on “Beef feedlots: Polluters or efficient use of resources?”