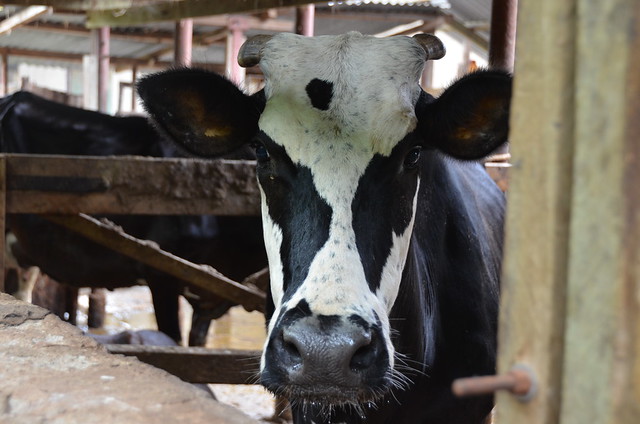 The livestock population in Tanzania, at 25 million cattle, is the third largest in Africa. Nearly all (98%) are indigenous breeds, owned by smallholder farmers. Most of these dairy cows are kept in areas unsuited to them. Unsuitable environments, combined with poor dairy management practices, results in low milk production, something the International Livestock Research Institute (ILRI) and its Tanzanian partners are seeking to reverse.

Attempts by farmers to increase dairy yields have centred on cross-breeding indigenous animals with higher producing ones. However, due to the absence of a breeding and mating strategy, breed composition of these animals is unknown, making it extremely difficult to improve low milk yields.

The ILRI-led project, Tanzania Dairy Genetic Project (AgriTT), in understanding the breed composition of dairy and indigenous cattle in the country, seeks to find the appropriate dairy cattle genotypes that will help farmers identify dairy breeds most suitable to farm environments. The project also identifies the best ways of transferring knowledge on improved animal husbandry to farmers, helping them increase their dairy production.

Started in August 2014, the project targets households with at least two dairy cows or with an active bull. Preliminary results from a baseline survey show that on average dairy farmers in Lushoto and Rungwe districts, the project’s focus areas, own four acres of land and rely on Napier and Guatemala grass to feed their animals.

The survey shows that men head most of the households involved in dairy farming in Lushoto District, while Rungwe District has more such female-headed households (about 10%). Hired labour accounts for less than 20% of those employed in dairy farms across the two districts–household members do most of the work–and local banks are the main sources of credit for farmers.

The project will collect bio-samples from 960 animals to assess their genetic makeup and diagnose diseases and obtain performance records. Findings from the two-year project are expected to provide critical information that will inform the breeding strategy in Lushoto and Rangwe, subsequently to be scaled up to the rest of the country.

AgriTT is a collaboration of ILRI, the Nelson Mandela Africa Institute of Science and Technology (NMAIST), the Scottish Rural University (SRUC) and the China Agricultural University (CAU).

With additions from Paul Karaimu, communications officer at ILRI.