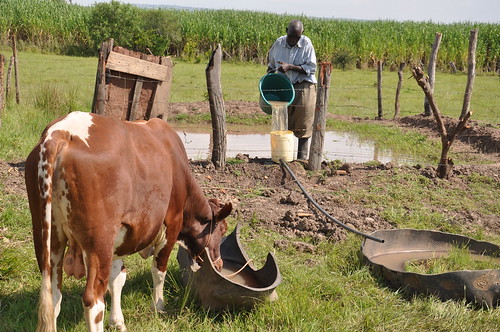 We are not aware of any studies to date that compare the costs and benefits
of the range of [climate] adaptation possibilities
in the mixed systems of sub-Saharan Africa in any comprehensive way.

A neglected part of climate change adaptation research—investigations of the ubiquitous mixed crop-and-livestock farming systems that are the backbone of food production across the developing world—is highlighted in a recent article in Nature Climate Change.

The authors are Philip Thornton, of the International Livestock Research Institute (ILRI) and the CGIAR Research Program on Climate Change, Agriculture and Food Security (CCAFS), and Mario Herrero, formerly of ILRI and now at the Commonwealth Scientific and Industrial Research Organisation (CSIRO), in Australia.

This [dearth of data] is true not only for ‘mixed systems’
but also for climate information services, for insurance, for social safety nets, etc.

There is very, very little data on the social as well as economic and environmental
costs and benefits of different approaches to helping smallholders
better adapt to climate change.
—Bruce Campbell, CCAFS

Below are excerpts of an article on this topic published this week by Cecilia Schubert, of CCAFS.

‘For millions of smallholder farmers in sub-Saharan Africa, South Asia and other parts of the developing world, deciding between growing crops and rearing animals has never been up for discussion. Instead farmers here mix it up, as keeping both livestock and crops on the farm provide milk for the family, meat and vegetables on the table and crops to sell on the market.

‘A recent perspective piece published in Nature Climate Change by researchers Philip Thornton and Mario Herrero suggests that we still know very little about how climate change will impact these mixed farms and especially the interactions between crops and livestock. This is alarming as mixed farming systems form the backbone of smallholder production in developing countries,producing over 90% of the world’s milk supply and 80% of the meat from ruminants.

‘It is clear to see how important these systems are to millions of people, contributing heavily to livelihoods and incomes, and even the globe’s food supply. Making sure mixed farmers know the way forward for effective climate adaptation and resilience building is crucial.

‘There are a number of climate-smart farming options that support climate adaptation, mitigation and improve food security that mixed farmers can pick up.

‘These options use the fact that there are both livestock and crops grown on the farm and how these can interplay to strengthen climate resilience. . . .

Through a better understanding and continued support for farmers to mix things up on the farm, millions of smallholders can start to build resilience against a changing and more variable climate.

Read the whole article by Cecilia Schubert, of CCAFS, on the Thompson Reuters Foundation ‘Trust’ site: Why mixing it up on the farm is key for climate change adaptation, 16 Sep 2015.

Read the science perspective article in Nature Climate Change: Adapting to climate change in the mixed crop and livestock farming systems in sub-Saharan Africa, by Philip Thornton and Mario Herrero.

Philip Thornton is a researcher with the International Livestock Research Institute (ILRI) and a flagship leader at the CGIAR Research Program on Climate Change, Agriculture and Food Security (CCAFS). Mario Herrero works at the Commonwealth Scientific and Industrial Research Organisation (CSIRO).