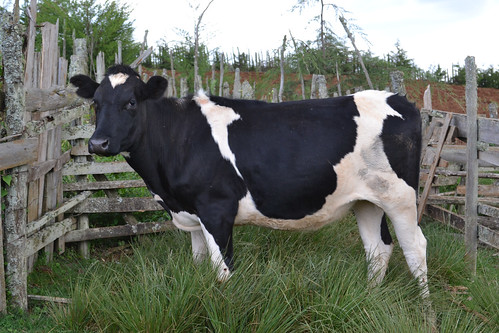 ‘On a hillside about an hour’s drive north of Nairobi, Kenya’s capital, is a visible demonstration of the difference between the miserable reality of smallholder farming in Africa and what it could be. On one side of the steep terraces stand verdant bushes, their stems heavy with plump coffee beans. A few feet away are sickly ones, their sparse leaves spotted with disease and streaked with yellow because of a lack of fertiliser.

‘Millicent Wanjiku Kuria, a middle-aged widow, beams under an orange headcloth. Cash from coffee has already allowed her to buy more land and a cutting machine that prepares fodder for a dairy cow that lows softly in its thatched shed. Her bumper crops are largely a result of better farming techniques such as applying the right amount of fertiliser (two bags, not one) and pruning back old stems on her trees. Simple changes such as these can increase output by 50% per tree. . . . This year’s crop will pay for a pickup, she says, so she no longer has to hitch rides on a motorcycle.

Mrs Kuria’s success invites a question. If it is so easy to raise a small farmer’s output, why haven’t all the small farmers managed it? To say that the answer matters is a wild understatement. Africa’s poorest and hungriest people are nearly all farmers. To lift themselves out of poverty, they must either move to a city or learn to farm better.

‘It should be possible to grow much more in Africa. . . . Five decades ago it was one of the world’s great crop-exporters. Ghana grew most of the world’s cocoa, Nigeria was the biggest exporter of palm oil and peanuts, and Africa grew a quarter of all the coffee people slurped. Since then it has shifted from being a net exporter of food to an importer. . . .

Yet this Cinderella sector is now being seen as an opportunity rather than a “development problem”, says Mamadou Biteye, who heads the African operations of the Rockefeller Foundation, a charity. Money from organisations such as Rockefeller, the Gates Foundation and do-gooding companies such as Nestlé is pouring into supporting small farmers. . . .

The World Bank estimates that food production and processing in Africa could generate $1 trillion a year by 2030, up from some $300 billion today. Yet many remain sceptical that Africa’s small farmers will achieve their potential.

To some, the rewards on offer seem too good to be true, like the $50 on the pavement that the economist in the joke walks past because “If it were real, someone would already have picked it up.”

‘Yet the success of projects such as those run by TechnoServe and Olam (a commodity trader that helps farmers grow more cashews, sesame seeds and cocoa in Nigeria) suggest that there may well be $700 billion on the pavement—or rather, in Africa’s fields. Instead of subsidising steel and other big industries, African nations should wake up and sell more coffee—not to mention cocoa, nuts and maize.’

Read the whole article in the Economist: Wake up and sell more coffee: Small farmers in Africa need to produce more. Happily that is easier than it sounds, 19 Sep 2015.