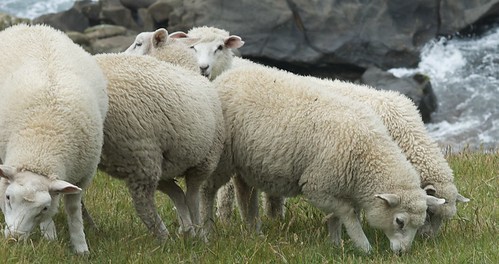 A surprising and neglected source of greenhouses gas emissions are the world’s ruminant farm animals—cattle, sheep, goats, camels, water buffaloes and so on.

‘Ruminants play host to bacteria that digest the otherwise undigestible grass and other cellulose-rich plants those animals eat, making nutrients such as fatty acids available to the beasts the bacteria inhabit.

‘But the complicated ecosystem of a ruminant’s stomach includes other creatures, too. Many are methanogens—organisms that react carbon dioxide with hydrogen made by the cellulose-digesting bugs, to create water and methane. A lot of methane. A hundred million tonnes of it a year for all the world’s domesticated ruminants, according to the United Nations’ Food and Agriculture Organisation. And methane is a greenhouse gas 25 times more powerful than CO2. Altogether, according to estimates by Andy Reisinger, of the New Zealand Agricultural Greenhouse Gas Research Centre, methane emitted from livestock is responsible for about 14% of global warming since the beginning of the Industrial Revolution.

‘New Zealand is one of the guilty parties. Its 40m head of sheep and cattle mean that a third of its contribution to global warming is ruminant-belched methane. But Peter Janssen of AgResearch, the country’s main farming-science institute, hopes to change this. He and his colleagues are looking for ways to reduce the amount of methane the country’s animals burp up.

‘Their first approach is to develop methanogen-specific drugs. . . .

‘The problem with this approach is that it requires animals to be treated continuously, to stop the methanogens returning to full strength. This is fine when beasts are being farmed intensively, as is often the case in Europe . . . . But cattle in New Zealand, and sheep everywhere, are normally put out to pasture, so Dr Janssen has a second string to his bow: vaccination.

‘To do this, his team identified and synthesised proteins found on the surface of ruminant methanogens, and injected these into sheep and cattle, to try to raise antibodies to those proteins. In that they have succeeded. . . .

‘A third approach is to breed animals with a lower propensity to burp methane. Among sheep, for example, some animals emit as much as 10% less of the gas than others. . . .

‘Dr Janssen’s fourth approach is to alter what animals eat. Certain food plants—forage rape and fodder beet, in particular—curb methane emission by as much as 25% compared with the belchings of animals fed on grass and clover. . . . Most farmers, [however], would require quite a lot of persuading to use them more widely.

‘In New Zealand, such persuasion is being discussed. Its most probable form would be what is known memorably, though inaccurately, as a fart tax (most ruminant methane is belched, not farted). Whether such a tax could actually pass through the political process of a country so dependent on farming is moot. . . .

‘One of the simplest answers, though, may just be better husbandry. . . .’

Read the whole article in The Economist: Stopping the big burp—Researchers in New Zealand are trying to prevent livestock belching methane, 16 Jan 2015.