Just So Story? Positive deviance? Unnatural selection? Reverse engineering?
Spectacular workaround? Giraffe genome hack? Fit for purpose? (What purpose, exactly?):
Above and below, images from ‘How the giraffe got its long neck’,
by Class 7 of the Good Shepherd Primary School, Eastern Cape, South Africa (via The Open University).

Morris Agaba is a molecular geneticist who spent many years in Nairobi, Kenya, first at the International Livestock Research Institute (ILRI) and then at the Biosciences eastern and central Africa-ILRI (BecA-ILRI) Hub. For the last five years, Agaba has been associated with the Nelson Mandela African Institute of Science and Technology (NM-AIST), in Arusha, northern Tanzania, where he now works full-time as a professor.

NM-AIST is one in a network of pan-African institutions of science and technology. The brainchild of the late Nelson Mandela, these institutions are training and developing the next generation of African scientists and engineers to impact profoundly the continent’s development.

Agaba was born and raised northwestern Uganda, where his time was split, he says, between school, raising chickens, growing food crops (potatoes, millet, maize, beans ground nuts and simsim [sesame]), and forays into the bush to collect honey, trap termites and observe nature. A practicing bee farmer and passionate walker till today, Agaba has always actively involved himself in supporting and mentoring a new generation of African scientists.

With long stints spent in Uganda, England, Japan, Scotland, Kenya and now Tanzania, the trajectory of Agaba’s cultural as well as research interests has proved perhaps more tangential than that of most biological scientists, themselves well known for their intellectual digressions. After graduating from Makerere University, in Uganda, he received a doctoral degree in molecular genetics from Brunel University, in London, followed by research fellowships at the Japan Livestock Technology Association, in Tokyo, and the Institute of Aquaculture at the University of Stirling, in Scotland. His core scientific expertise is experimental research to understand basic biological processes and to develop tools for Africa’s livestock breeders and resources for other researchers. His work draws largely from veterinary, biochemistry and molecular sciences. His past studies included host-pathogen interactions, livestock nutritional genetics and hereditary disorders, and the molecular genetics of livestock breeding. In Nairobi, he investigated the genetics of disease resistance in African cattle and harnessed the genetic diversity of African goats to improve smallholder productivity. Among his other investigative enthusiasms are that of substituting fibre-rich energy foods for grains in chicken feed and advancing understanding of the genetics of the wild relatives of domesticated livestock.

Agaba’s newest passion is the molecular genetics of the giraffe, specifically the genes responsible for the animal’s impossibly long neck and legs—and the highly adaptive cardiovascular system this animal has evolved to manage its formidable biological obstacles.

From the abstract of a new paper on the giraffe genome by Agaba and colleagues
‘The origins of giraffe’s imposing stature and associated cardiovascular adaptations are unknown. Okapi, which lacks these unique features, is giraffe’s closest relative and provides a useful comparison, to identify genetic variation underlying giraffe’s long neck and cardiovascular system. The genomes of giraffe and okapi were sequenced, and through comparative analyses genes and pathways were identified that exhibit unique genetic changes and likely contribute to giraffe’s unique features. . . .’

From the introduction to the paper
‘The origin of giraffe’s iconic long neck and legs, which combine to elevate its stature to the tallest terrestrial animal, has intrigued mankind throughout recorded history and became a focal point of conflicting evolutionary theories proposed by Lamarck and Darwin. Giraffe’s unique anatomy imposes considerable existential challenges and three systems bear the greatest burden: the cardiovascular system to maintain blood pressure homeostasis, the musculoskeletal system to support a vertically elongated body mass and the nervous system to rapidly relay signalling over long neural networks. . . .

‘Here we sequenced the genomes of the Masai giraffe and okapi, and through comparative analysis with other eutherians [sic] mammals, 70 genes were identified that exhibit multiple signs of adaptation (MSA) in giraffe. Several of these genes encode well-known regulators of skeletal, cardiovascular and neural development, and are likely to contribute to giraffe’s unique characteristics.’

The conclusion of the discussion section of the paper

Among mammals, giraffe has some of the most challenging physiological and structural problems imposed by its towering height.

The solutions to these challenges, in particular related to its turbocharged circulatory system, may be instructive for treatment of cardiovascular disease and hypertension in humans.

The following, culled from a recent article in the New Yorker, provides further context for Ababa’s new giraffe genomic findings, including earlier more offbeat, speculative, efforts in this field.

‘For centuries, the giraffe’s unusual anatomy has confused and intrigued human observers. The animal’s long neck is most baffling of all.

‘It’s difficult to know what to make of the giraffe. It shuffles like a camel (right legs forward, then left legs) but runs like a rabbit (hind legs forward, then front legs). Its distinctive aroma repulses many ticks but enchants certain people. It bellows, hisses, and moans in the wild, and in captivity it hums in the dark. It naps with its head aloft but sleeps like a swan, with its head on its haunches. . . . Not until the seventeenth century did the English, who fixated on the giraffe’s camel-ish shape and leopard-ish coloring, stop calling it a camelopard. . . .

‘And then there’s that neck. Why is it so long? Unlike the swan and the ostrich, which have a surplus of neck bones, the giraffe has seven cervical vertebrae, the standard count for a mammal. But each one is eleven inches in length. A human’s entire spine, by comparison, is about two feet from top to bottom, not much longer than a giraffe’s tongue. . . . The French naturalist Jean-Baptiste Lamarck held that a giraffe was merely an antelope whose progenitors had strained their necks toward higher and higher branches for food. 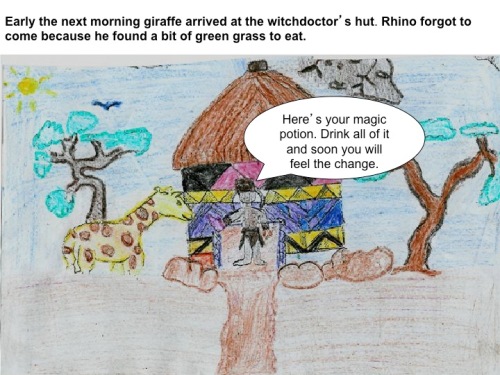 ‘Charles Darwin gave barely a thought to the neck problem—it didn’t appear in his magnum opus, “On the Origin of Species,” until the sixth edition—but he favored a similar, if more scientifically rigorous, explanation. In periods of drought, he suggested, when all the other animals on the savannah were scrounging at eye level, Giraffa sprouted the evolutionary equivalent of an EZ Reacher, which gave it access to a private larder in the succulent crowns of the acacia trees, a privilege it passed on to its offspring. . . .

So under nature with the nascent giraffe, the individuals which were the highest browsers and were able, during dearths, to reach even an inch or two above the others, will often have been preserved . . . . By this process long-continued . . . combined no doubt in a most important manner with the inherited effects of increased use of parts, it seems to me almost certain that any ordinary hoofed quadruped might be converted into a giraffe.
— Charles Darwin, Origin of the Species, 1859

‘The theory was accepted as gospel for decades, until researchers noticed two problems. First, no other quadrupeds underwent such a conversion: the giraffe remained the lankiest thing around. And second, the animal grazed with its neck horizontal about half the time, feeding on the same bushes and shrubs as everyone else. (As Edgar Williams notes in his book “Giraffe,” the animal is a born topiarist, “giving a manicured appearance to the savannah.”)

‘Another popular theory involved sexual selection. . . . Yet another theory, less widely accepted than the first two, posits that the giraffe’s long neck is compensation for its long legs. (You try bending down to drink on those things.) The neck’s true provenance is perhaps some combination of these theories. As Darwin wrote, “The preservation of each species can rarely be determined by any one advantage, but by the union of all, great and small.”

‘A new paper, published today in the journal Nature Communications, addresses the issue from a genetic perspective. The lead authors of the study—Morris Agaba, of the Nelson Mandela African Institute for Science and Technology, in Tanzania; and Douglas Cavener, of Pennsylvania State University—seem less interested in why the giraffe’s neck is so long than in how and when it got that way, a question they investigate by comparing the giraffe’s genome to that of its closest living relative, the okapi. . . . [Okapi look like a cross between a zebra and a deer, but they belong to the same family as giraffes.]

‘Agaba, Cavener, and their colleagues estimate that the two species diverged about eleven and a half million years ago, fairly recently on the evolutionary time scale. By cross-referencing the animals’ genomes, the researchers were able to focus on seventy giraffe genes that show unique signs of adaptation. Fully two-thirds of these DNA snippets control aspects of development and physiology.

‘Consider, for a moment, the biomechanical quandaries involved in being a giraffe. To get blood from your heart to your brain, a vertical distance of at least six feet, requires blood pressure two and a half times higher than a human’s. Every time you bend down for a drink, spreading your front legs a little in order to get lower, the blood rushes to your head and you risk stroke. Every time you straighten up, the blood rushes back and you risk fainting. And when you’re standing, gravity causes fluid to pool in your lower extremities, which makes them swell. 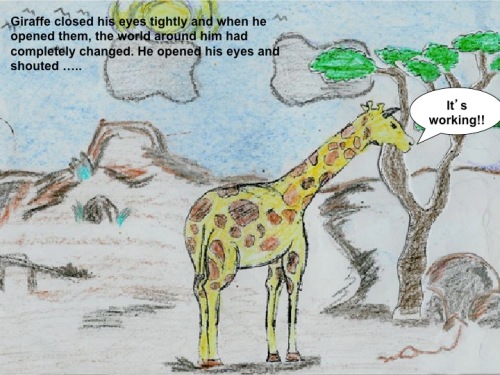 ‘The giraffe manages these handicaps with a suite of anatomical innovations. Its heart is “turbocharged,” according to Agaba and Cavener, small in proportion to the animal’s over-all size but with tremendously thick walls. The veins, arteries, and capillaries are rugged, too, behaving as a kind of dampening system to prevent the blood from sloshing around willy-nilly. And the giraffe’s skin, tough and tight-fitting, performs the same task as a compression stocking. . . . The adaptations are also neurological. . . . And, if the prospect of swallowing food down such a long neck is startling, recall that giraffes are ruminants, and that whatever goes down must also come up. Their esophageal muscles are correspondingly strong.

‘The seventy genes that Agaba and Cavener’s group examined doubtless play a role in many of these adaptations, regulating which regions of the embryonic giraffe’s skeleton expand and how much, and instructing the developing vascular and nervous systems how to compensate. . . . The team is unveiling a new initiative, the Giraffe Genome Project, to continue their inquiries. In the meantime, the camel-like, rabbit-like, swan-like, ostrich-like giraffe will remain one of nature’s curiosities, its neck swaying faintly as it shuffles across the savannah.’

Read the whole article, How the giraffe got its neck, by Anthony Lydgate, New Yorker, 17 May 2016.

I had time after time watched the progression across the plain of the giraffe, in their queer, inimitable, vegetative gracefulness, as if it were not a herd of animals but a family of rare, long-stemmed, speckled gigantic flowers slowly advancing.
— Isak Dineson, Out of Africa, 1936