The western region of Kenya is not a traditional dairy production area, albeit having substantial resources that can support dairying. The region has, in the past, been left out of most dairy development initiatives in the country and its potential to contribute to the dairy sector, which accounts for 8% of Kenya’s GDP, is yet to be fully exploited.

Since its inception at the start of 2016, AVCD has provided opportunities for more households to tap into the lucrative dairy products market in Kenya. 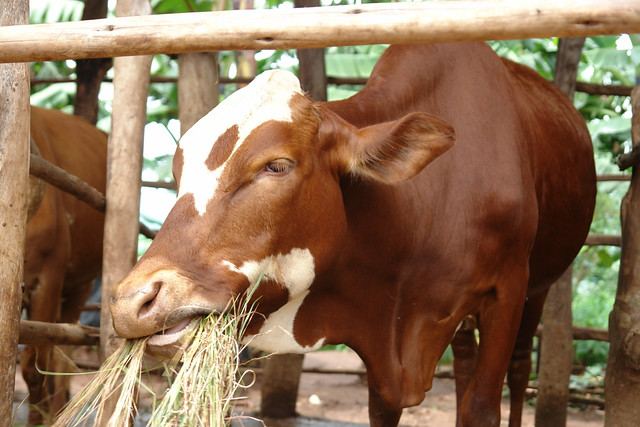 One way ILRI is providing such opportunities to smallholders is by promoting accelerated breeding through fixed-time artificial insemination (FTAI). The FTAI intervention is overcoming barriers to farmers’ entry into the dairy value chain by providing them with a cheap way to upgrade their dairy animals. FTAI technology involves synchronizing the reproductive cycles of clusters of animals through hormone therapy followed by mass insemination. By targeting a large number of animals for oestrus synchronization, particularly cows of indigenous breeds, the technology ensures that large sets of households adopt improved dairy cows and enter the lucrative dairy value chain.

Building a critical mass of animal insemination service providers
To build a pool of competent artificial insemination (AI) service providers in western Kenya, the AVCD program offered a five-day refresher training course for 53 AI technicians. The training was held in Migori and Siaya counties in May 2016 and included AI technicians from all the six target counties.

While artificial insemination has been around for a long time, not many livestock farmers in the region have been using the service. The low demand for AI services is a result of a scarcity of improved dairy cows, which kept the cost of the service high for the few farmers interested in it and kept the profit margins low for the service providers.

The refresher course exposed the technicians to efficient ways of providing the service and encouraged them to embrace the technology from a business point of view.

In Homa Bay and Migori counties, the program has deepened engagement with county governments through collaboration in the accelerated breeding program, which has attracted high interest from the county governments. Through their respective departments of livestock, the counties are now providing semen for the FTAI exercise.

On 23 Jun 2016, the AVCD dairy program launched the accelerated breeding program in Homa Bay County. The event, during which 274 cows were inseminated, was attended by Cyprian Awiti, the county governor, officials from the state department of livestock, farmers and the media.

So far, more than 1,000 cows have been inseminated in Homa Bay and Migori counties.

The AVCD program is supported by the Feed the Future initiative of the government of the United States of America. This program seeks inclusive agricultural growth and improved nutrition in four agricultural value chains in Kenya—dairy, livestock, drought-tolerant crops and root crops. The AVCD program is implemented jointly by ILRI, the International Potato Center (CIP) and the International Crops Research Institute for the Semi-Arid Tropics (ICRISAT). ILRI is leading the dairy and livestock value chain components while CIP and ICRISAT are leading root crops and drought-tolerant crops, respectively.