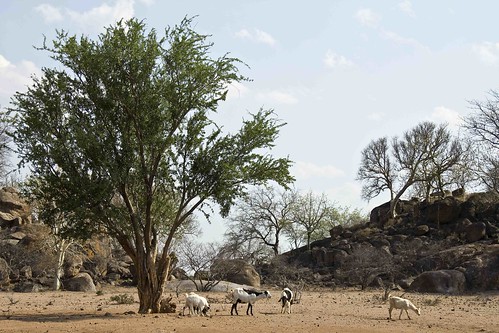 The picture of the Sahara as marching inexorably south year after year is incorrect and was, moreover, an illusion created not by livestock over-use but rather by a recent string of dry years. Indeed, decades of satellite data are now confirming that the southern edge of the Sahara periodically moves south and north in response to changes in rainfall rather than changes in livestock populations. It thus appears that the conventional wisdom on the causes of widespread desertification is false.
—ILRI article, 1995

Ian Scoones reviews a new book on the long history of myths about dryland desertification. Scoones, co-director of the STEPS Centre at Sussex and joint convenor of the Future Agricultures Consortium hosted by the Institute for Development Studies, is an agricultural ecologist by training and an ‘interdisciplinarian’ by practice. ‘Over the past twenty-five years, he has worked on pastoralism and rangeland management, soil and water conservation, biodiversity and conservation, as well as dryland agricultural systems, largely in eastern and southern Africa. A central theme has been a focus on citizen engagement in pro-poor research and innovation systems.’

Excerpts from Scoones’ excellent review, with its important messages, follows.

‘A great new book has just been published called The End of Desertification? Disputing Environmental Change in the Drylands . . . . It is edited by two people who know a thing or two about these issues—Roy Behnke and Mike Mortimore—and it has 20 top quality chapters from all over the world, documenting why the term desertification has passed its sell-by date, if it ever had one at all. It is an impressive and timely synthesis . . . .

The myths of desertification have a long history. Ideas of desiccation and desert advance framed colonial science, informed by the narratives of the ‘dust bowl’ in the US. Yet whether from long-term environmental monitoring, areal and satellite photography, ecological modelling or local knowledge and field observation, the standard narratives have been found severely wanting.

‘Unfortunately this accumulated evidence has been ignored, and the narratives of desertification persist. . . .

‘In the 1970s, influenced by the new mathematics of complexity, ecologists such as Bob May argued that stability not an expected feature of ecosystems, even under deterministic conditions. In the context of African rangelands, Jim Ellis and team in Turkana—notably through the classic 1988 paper—contributed to an understanding of ecosystems not at equilibrium where density-independent factors (rainfall/drought/flood/snow) meant that animal populations were not at equilibrium, and different management regimes needed to apply.

‘Challenges to desertification myths, and simplistic equilibrium approaches to rangeland dynamics based on Clementsian succession ecology, have long been made. . . . A new paradigm for African rangeland management was born. . . .

Why is it that, even when scientific evidence is incontrovertible, then shifts in policy discourse and practice doesn’t happen?

‘As always, in the debate about drylands in Africa we have to look at the intersections of discourse, actors, interests and politics—and so the politics of knowledge in policy. Here other forces are at play, beyond the slow accumulation of knowledge. . . .

Even today, it is amazing how often you see projects, documents, statements, plans repeating the same old story as if debates in science over decades had never happened. . . . While the science of rangelands has shifted, among field level departments, aid agencies, and their officials—old ideas stick. . . .

‘There is also the persistent and insidious power of incumbent institutions, hooked into a narrative that will not budge. . . . Too often, spurious science and economics are presented as fact, supporting a narrative that we thought had been dismissed decades ago.

As science over many decades has shown, non-equilibrium ecology is a useful way of thinking about complex, highly variable dryland ecosystems—especially in the context of climate change. In particular, it provides a useful basis for challenging simplistic, linear desertification narratives.

‘The key lesson is that there is no simple, standardised solution to dryland development, especially with fast-changing climatic, economic and political contexts—flexibility, agility and adaptive management is key. It is not amenable to a standard, control-oriented technocratic response.

‘Just as the science has undergone a paradigm shift, so must policy and practice. . . .

‘Particularly worrying in the last ten years has been how the desertification narrative has been reinforced by debates about climate change. Again, against much evidence, climate change is simply taken to mean a secular shift, and so increasing desiccation, leading to land degradation and desertification. In fact, much climate science points to processes of increasing variability and uncertainty, not secular change.

The satellite image data shows ‘deserts’ expanding and contracting over time in a complex patchwork, and not simply advancing.

‘A focus on non-equilibrium, dynamic systems points to a different response—one centred on flexibility, adaptive management, responsive care and resilience, not control and technocratic intervention. The desertification narrative promotes a control-oriented response—with destocking, ‘green belts’, forest planting and engineering solutions dominating—rather than one that embraces uncertainty, and makes productive use of variability, as in the non-equilibrium paradigm.

‘But of course realising the alternative paradigm is difficult. Institutional biases, procedures and routines reinforce control, especially when funding agencies and governments have fewer and fewer people in the field, connecting with the real world of the drylands. Funding flows, metrics, goals and targets just add to this, and I fear that both large-scale climate finance and the framing of the SDG goal 15 will only compound the problem.

‘So will this book make a difference? Is this the end of desertification talk? I hope so. But I also doubt it . . . .

Evidence, as we’ve seen, is not enough. We have to expose powerful people and institutions; we have to refuse to engage with organisations that promote inappropriate models of dryland development, and challenge them forcefully at every turn. . . .’

Read the whole article by Ian Scoones on the STEPS Centre blog, Why we should stop talking about desertification, 18 Jul 2016.

Copied below is an ILRI article written in 1994 (at ILRI’s predecessor, the International Laboratory for Research on Animal Diseases, ILRAD) that summarizes some of Jim Ellis’ argument. As Michael Coughenour writes in a 2004 paper, ‘Jim Ellis contributed greatly to improved understanding of the importance of mobility and opportunism in these ecosystems. This understanding could benefit humans, ecosystems and wildlife over a vast portion of the earth’s surface.’ And as Roy Behnke and Carol Kerven explain in their 1994 paper: ‘Throughout the 1960s and 1970s there was a blueprint for African range and livestock development projects: the ranching model. By the early 1980s poor project performance had undermined confidence in this model. There ensued a decade of experimentation . . . . The ‘ranching model’ projects of the 1960s and 1970s presumed that enlightened resource management was both intrinsically good and likely to pay economic dividends. For rangelands, economics and conservation were linked by the presumption of pastoral overstocking. Overstocking explained why Africa pastures were degraded, herd output was low, and pastoralists were poor. The problem with the ranching projects was that they could not deliver lower stocking rates. Whatever their other successes, the development initiatives of the 1980s suggested few new techniques for adjusting livestock numbers to forage supply on Africa’s open rangelands.’

For an elegant discussion of the on-going ‘paradigm shift’ in views about the dynamics of dry tropical ecosystems and their use by African herders, see ‘Ecosystem dynamics and econo­m­ic development of African rangelands: Theory, ideology, events and policy’, by Jim Ellis, in Environ­ment and Agriculture: Rethinking Development Issues for the 21st Century (Winrock International, 1994, pp. 174–185). The following ideas and statements are ex­cerpt­ed from that paper.

The mainstream view of pastoralists and their domestic livestock as agents of environmental destruction, a view derived ‘both from development failures and from myths and ideology built up over the past half century’, grew rapidly in the 1970s and 1980s. ‘Desertification provided the linchpin of the mainstream ideology’, which the popular press embraced, ‘so that the informed public and policy makers in North America and Europe now believe that livestock are responsible for worldwide environmental destruction.’

The current drought in the Sahel, which began in the 1950s, was believed to be causing the Sahara to expand rapidly southwards and was blamed on overexploitation of the land, which ‘disrupted ecosystem equilibrium, leading to or at least exacerbating the drought’. However, concern about the drought also ‘stimulated a stream of new analyses of long-term African climate patterns’, which suggested that shifts in desert boundaries were ‘the natural outcome of long-term climate fluctuations, rather than the result of mismanagement by indigenous people.’

In the early 1980s, ‘several long-term interdisciplinary studies of livestock-dominated ecosystems’ were begun ‘to answer questions about the fundamental relationships between people, livestock, and the environment . . . . To make a decade-long research story very short, . . . while some studies did document limited degradation due to livestock grazing, the more general conclusions supported the concept that traditional African livestock husbandry prac­tices were compatible with Africa’s climatically driven, dramatically unstable, nonequilibrial rangeland ecosystems, and were not inherently destructive.’ In the same period, remote-sensing technology and application of NDVI (normalized difference vegetation index) data showed no evidence of the Sahara advancing south but rather that ‘vegetation abundance waxes and wanes dramatically with annual rainfall patterns.’

Thus, ‘the weight of scientific evidence shows that human-induc­ed desertification is not an overwhelming problem. In contrast, there are serious economic, human welfare, and related political problems that do need attention. . . . The scientific progress of the last decade pro­vides us with a knowledge base upon which we can begin to formulate new development approaches to advance human welfare, maintain environmental values, and work toward economic growth and political stability. . . . As a first step perhaps we should acknowledge that indi­genous pastoralists have devel­op­ed methods for dealing with variability that have worked reasonably well for at least 3,000 years.’