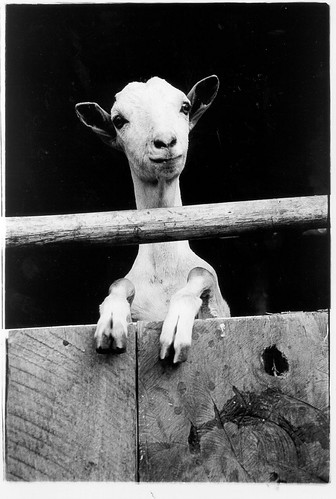 ‘When you think of goat meat, fragrant Jamaican curries, like the ones served up from colourful street stalls at the Notting Hill Carnival last weekend, or an exotic Moroccan tagine typically come to mind.

‘But did you know that shoulder joints melt like butter when slow-roasted, leg steaks are tender in casseroles and chops are particularly succulent after being cooked on a summer BBQ? Goat meat also makes for delicious garlicky Merguez sausages à la France, but more of that later…

Goat meat makes up 60 per cent of red meat worldwide, but the UK is one of the few places in the world where it’s not commonly eaten. That is slowly changing. Goat meat, kid, is in fashion. It . . . will soon be on supermarket shelves.

‘Why goat meat should be the next dish you serve up, I kid you not…

‘Former River Cottage chef, James Whetlor is one of the pioneers of the goat meat revolution. Founded in 2012, his company, Cabrito (Spanish for ‘young goat’) rears and sells upwards of 10,000 kids a year—which would otherwise be culled just after birth as a by-product of the dairy industry—to seasonal and highly-regarded restaurants such as St John and Quo Vadis in London and Romy’s Kitchen in Bristol. . . .

‘There’s about another 40,000 male billy goats in the dairy system that are still being senselessly wasted because as a nation we love goats cheese and goats milk, but don’t eat kid. However, James has to grow demand alongside supply, which is not the easiest of jobs, especially when you’re asking people to try something new that is comparable in price to organic lamb. . . .

‘For those that consume goat dairy products, the question of what to do with non-milk producing billies is a complex ethical issue, and one that bears thinking about. . . .

‘Animal welfare is top priority, the newborns are milked and weaned naturally by their mothers, sleeping all together in a barn at night and let out to graze by about 9:30am every day – they refuse to get up before then. “They are quite precious,” Fiona explains. “They also don’t particularly like wet feet, or loads of mud.”. . .’

Read the whole article at The Independent: Why goat meat is set to be the next big food trend: it’s not just tasty, it’s ethical, too, 3 Sep 2016.