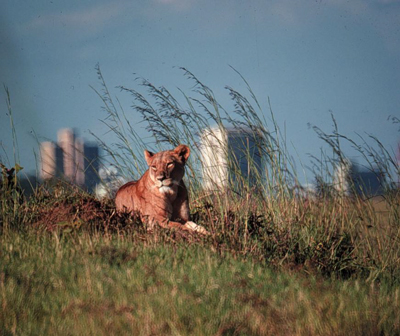 Kenya’s once-wildlife-rich rangelands are under threat:  A lioness sits in Nairobi National Park; the Nairobi city centre skyline is behind her (photo credit: ILRI/Dave Elsworth).

‘There have been disturbing declines in wildlife populations in Kenya in the past three decades, a study released this week revealed.

‘”Human population growth, increasing livestock numbers, declining rainfall and a striking rise in temperatures are to blame for the decline,” Dr. Joseph Ogutu, a researcher and lecturer at Germany’s University of Hohenheim that led the study, told Xinhua in an email interview.

Ogutu said that researches from 1977 to 2016 in Kenya’s rangelands
show ‘extreme declines’ in wildlife populations
and increase in livestock numbers.

The study shows that the future of Kenyan wildlife
is in serious jeopardy if without urgent, far-reaching
and far-sighted changes to the current conservation and management.

‘. . . The researcher suggests that to help restore the situation, some pastoral lands retaining wildlife should be buffered against human activities.

‘The study calls . . . effective implementation of land-use policies and legislations that aim to minimize human-wildlife conflict, habitat degradation, fences, cultivation and annexation of water resources in the rangelands. . ..

‘The study was carried out by researchers from University of Hohenheim, the International Livestock Research Institute and Kenya’s Department of Resource Surveys and Remote Sensing.’