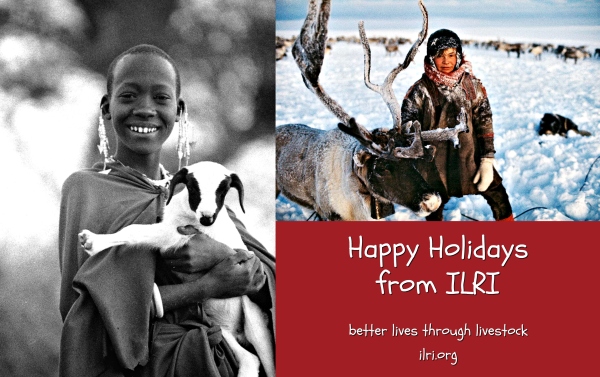 Boys with their kid goat and reindeer in Kenya and Finland (photo credits: [left]: ILRI/Stevie Mann and [right]: UN/O Monsen).

‘Daybreak on the outskirts of Salla, a town in Lapland, north of the Arctic Circle in Finland . . . . Aarne Aatsinki walks in, clutching a bag of organs from one of his recently slaughtered reindeer: a tongue, heart and intestines floating in bright red blood.

“I don’t know where the reindeer end and he begins,” Ms Korpela says of the man she has spent 23 years with.

Mr Aatsinki’s family has been herding reindeer for centuries, part of the long almost symbiotic relationship between humans and Rangifer tarandus.

Some of the earliest images carved on stone in Europe are of reindeer. . . .

Finns [have] adopted Sami practices, using reindeer for milk, meat, transport and as decoys for hunting other animals.

‘But this long relationship may be drawing to a close. Mr Aatsinki is finding it harder to make ends meet. The average herder has lost money for more than a decade and earns less than one-third of a Finnish farmer’s average wage. Mr Aatsinki and Ms Korpela both have second jobs. They worry that their children may not continue in the millennia-old tradition.

‘Today most of Europe’s 2m reindeer live in Russia, with another 600,000 split almost evenly across Finland, Norway and Sweden. . . .

A herder can have no more than 500 reindeer. How many any particular herder has, though, is hard to say. Asking is considered rude, says Ms Korpela—like asking a city-dweller how much he earns. Faced with such affrontery, a herder will be resolutely non-quantitative: “I have reindeer on both sides of the tree,” is the most you are likely to get.

Read the whole article in The Economist: Finland’s reindeer herders get a lot more than meat from their work, 24 Dec 2016.

‘The next few festive days will, for the only time in the year, see more meat consumed in rural areas than in Nairobi.

‘It may also, again a rare thing, see the consumption of goat meat overtake beef as city crowds take the choma culture to the village.

‘Experts from the International Livestock Research Institute (ILRI) say despite the ‘goat roast’ hype in Nairobi, beef remains the most eaten meat in Kenya. Seventy seven per cent of all meat eaten in Kenya is beef and mainly at home, ILRI says in a new study.

Sheep and goat meat are not widely consumed and when eaten, it is mainly by the middle and high-income groups as roasted meat, the experts say.

Two recent studies by several research institutions, led by ILRI, makes it clear that meat is the most relished food item by city residents.

ILRI estimates that on average, a Kenyan consumes 17 kg of meat per year. But of these, city residents consume almost four times more than their rural counterparts.

‘. . . One of the two studies led by Caroline Bosire of ILRI and the University of Twente, The Netherlands, shows meat in Nairobi to follow the whiff of money. . . .

‘They are followed by the less choosy middle class, the king of nyama choma in the city. . . . This class will address their meat in amounts of kilos for choma, tumbukiza, or boilo with lots of cabbages, kales, potatoes, dania (coriander) and a generous dose of hot pepper. Of course, the choma will go with a helping of ugali or kienyenji and a cover of kachumbari. The female in this class are most likely to take home a slaughtered chicken for the family.

‘The final group is the city poor who in most cases eat the pass overs, including entrails and extremities such as chicken head, toes, udders, chicken skin and gumboots. . . .

‘[These] people, the poor of Nairobi, are the subject of the second study led by Laura Cornelsen of the London School of Hygiene and Tropical Medicine and published last month in the BMC Nutrition journal.

‘[Laura] Cornelsen and her team mates from ILRI, The Royal Veterinary College (UK), African Population and Health Research Center (Nairobi) and the University of Liverpool (UK) focused on consumption of meat, egg and milk in Dagoretti and Korogocho areas of Nairobi.

‘More than half of the households in Korogocho, the study says, earn Sh5,000 monthly but still manage to bring to the table a semblance of meat. But this is no mean achievement. . . .

‘Going by the study, the poor of Dagoretti and Korogocho spend Sh1,372 on food weekly of which Sh520 is on animal protein with meat taking the lion’s share. . . .

‘This is how some of the poor do it: At Mutiso’s chicken slaughter kiosk at South B, a be-headed, disemboweled, de-legged and sometimes skinned chicken goes for about Sh1,000 to the middle class of Golden Gate Estate.

‘This is not the end of the chicken’, says Mutiso. ‘Somebody else will come for a piece of the entrails, the head, the skin or the toes for whatever money they have. By the end of the day, both the rich and poor will all have supped on a chicken.

The no-throw-away-anything meat culture in Nairobi, the study says, indicates a city that has fallen on some hard times.

‘Bosire’s study was published last month in the journal Science of the Total Environment collaborated with the World Agroforestry Centre (Nairobi), University of Hohenheim (Germany) and the National University of Singapore. . . .

Contrary to expectation, average meat consumption per capita across all income groups in Nairobi declined by 11 per cent, says the Bosire study.

‘She attributes this to a rising increase of meat prizes during the study period, especially for the middle and lower classes. Still the high income class of Nairobi consumes twice as much meat compared to their counterparts in Sudan and nearly four times higher than the average consumption in Ethiopia.’

But compared to the rest of developed world, Nairobi’s top meat eaters are still babies at an average of 17kg per year. Australia, Brazil and the USA, for example, are estimated to consume 52kg per year, 40kg per year and 37kg per year, respectively. . . .

Read the whole article by Gatonye Gathura in the Standard newspaper (Kenya): City crowds take the ‘choma’ culture to the village, 24 Dec 2016.