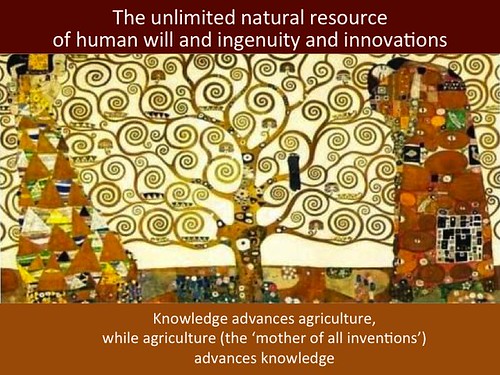 Slide from a keynote presentation made by Jimmy Smith, director general of the International Livestock Research Institute, at the Tropentag Conference, in Prague, 17 Sep 2014 (image credit: ILRI). Go here to view Smith’s full slide presentation: The interplay of knowledge and natural resources: Ensuring the health, wealth and environmental benefits of livestock, at the Tropentag 2014 Conference on Bridging the gap between
increasing knowledge and decreasing resources.
The following remarks are excerpted from an opinion piece written by Bill Gates and published on his Gates Notes blog.
‘The first promise of any good politician is to make people’s lives better, and scientific research leading to innovation is one of the best ways to honor that promise.

Until about 1700, there was basically no development. Almost everybody was poor, many were sick. One of every four children died. Average life expectancy was about 40 years, and 99 percent of people were illiterate. But then science came along and we started inventing—electricity, the steam engine, antibiotics, sanitation, vaccines, microprocessors, genetic medicine.

Science is the great giver—and we’re just at the beginning of what it can give.

‘The UK and France are natural homes for this message. The world owes an ongoing debt to the discoveries from both countries, including Alexander Fleming’s discovery of penicillin and Charles Darwin’s theory of evolution in Britain, and Louis Pasteur’s development of pasteurization and René Laënnec’s invention of the stethoscope in France.

The discoveries of these scientists weren’t just breathtaking insights into the nature of the universe; they became fuel for human progress.

Progress is not a law of nature, like gravity. It takes work.

‘. . . [W]hen a country funds innovations that make life better for people around the world, it defines itself as a global leader. Second, research and development brings a huge benefit to the countries doing the research because it creates high-paying jobs, encourages the growth of talent, and builds up the scientific capacity of the country that pays for it.

‘When a country builds its own scientific capacity, the benefits it gets are far beyond what it can imagine. That’s because some of the greatest discoveries of science are insights that came when looking for something else. Scientists begin searching for the answer to one problem and discover the answer to many others. And once a country builds scientific talent, it can deploy it quickly to urgent areas.

In the midst of a pandemic, for example, a country with great scientific resources can far more quickly track a disease, invent diagnostic tests and develop treatments and vaccines.

You can’t mobilize your talent if you haven’t already built it.

‘. . . Whether the research is in global health or agriculture or information technology or energy, the dynamic is the same.

Innovation comes from government spending on R&D plus the creative genius of the private sector which takes the findings from lab to market. . . .

I want to urge leaders here to take on our biggest problems through dramatic increases in scientific research—because we know that government-funded research can create jobs now, meet public needs soon, and lead to economic growth far into the future.

‘. . . Innovation is what helps us flourish.  To slow down on innovation now by missing the chance to boost research is to turn our back on our greatest strength. . . .

We need to invest in research as if billions of lives depended on it—because they do.

Read the whole article by Bill Gates on Gates Notes: Science is the great giver, 20 Oct 2016.