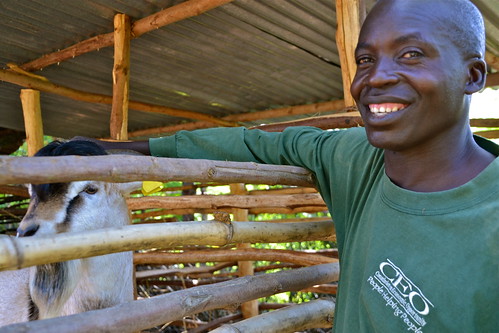 ‘One of the most urgent challenges we face in the next several decades is feeding a growing world population without irreparably damaging Earth’s land, air and water systems. Nearly 800 million people worldwide are undernourished today. The U.N.‘s Sustainable Development Goals call for ending hunger and achieving food security by 2030. . . .

‘Since 2000, [hunger] has decreased across all regions of the world, but 50 countries—mainly in sub-Saharan Africa and South Asia—still have alarming or severe hunger rates.

‘At the Global Landscapes Initiative in the University of Minnesota’s Institute on the Environment, our research focuses on increasing global food security while reducing harmful impacts from agriculture to Earth’s natural resources.

We have found that one key strategy to combating food insecurity—lack of access to nutritious foods—is increasing food production on small farms.

There are tremendous opportunities to increase yields throughout South Asia and sub-Saharan Africa. . . .

‘Small farms dominate South Asia and sub-Saharan Africa, where the hunger index scores are highest. These farms currently produce 41 percent of global calories from croplands, and the majority of crops that are essential for food security in many regions, including rice, cassava, groundnuts and millet. . . .

‘Many institutions working with smallholder farmers have shown it is possible to increase yields and also make production more sustainable and profitable. . . .

‘Creating change across millions of farms requires tremendous time investments to understand farmers’ needs and challenges and to gain their trust.

There is currently no Silicon Valley-style approach to quickly ‘hack’ food production on small farms.

‘But more gradual approaches can be very effective. . . . We can achieve food security and also promote sustainable agriculture by focusing on a small set of leverage points in the global food system. . . .

‘Sustainably increasing food production is an important piece of the puzzle, but it does not necessarily ensure that people will have constant access to food or will be well-nourished. As one example, studies have shown that farm households are more likely to have enough food to feed their families if they earn off-farm income in addition to raising crops.

‘An international group of food and nutrition scholars proposed a new research agenda in late 2016 that shifts the emphasis from calories—that is, feeding people—to nourishment. In their view, we need to organize an international effort as large as global campaigns against HIV/AIDs or smoking to remake global food systems so that healthy diets are available to everyone. . . .’

Read the whole article by Paul West, of the University of Minnesota, on The Conversation: Mind the gaps: Reducing hunger by improving yields on small farms, 23 Jan 2017.

Read an earlier report on this blog site about this research:
First map of smallholder farms in the developing world: They produce more than half the planet’s food calories, 13 Dec 2016