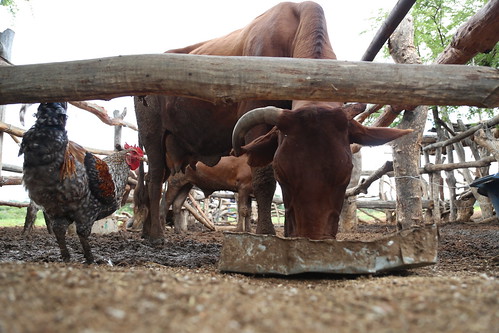 ‘Growing up in Chiware Village in Rusape, Manicaland province, vivid memories of tending to the family’s herd of cattle remain etched in the mind. Cattle are an integral part of every household, not only in Zimbabwe, but Africa as a whole.

The poignant memories of that herd with each beast carrying a specific name never die. In our herd were the oxen; Boxen, United and Point, as well as one particular cow called Shine.

‘Boxen (probably from Boxing) was popular for his huge stature and regular victories in cattle fights. United was infamous for goring the old grandfather who had to be ferried to Rusape District Hospital to have his mouth sutured. Even when United had to be put down for relish at a funeral, a painful decision had to be made.

‘Point, well, the ox returned home three months after being moved to Buhera to cover a family debt. Shine was known for her beautiful white coat with brown spots—a marvel of a cow.

‘These nostalgic memories are shared by rural farmers on the continent. They were triggered during deliberations during the International Conference on Livestock Value Chain and Access to Credit recently held in Ezulwini, Swaziland.

‘The conference was organised by the International Livestock Research Institute (ILRI) in partnership with the Swaziland Water and Agricultural Development Enterprise (Swade) and the Micro Finance Unit, Swaziland (MFU).

‘It was agreed, at that forum, that rural farmers created and grew a certain attachment to their livestock. This, it was further observed, played a major part in hindering farmers from commercially benefiting from their herds. . . .

At the Ezwilini Conference, experts were trying to find ways to unlock the livestock value chain, finances and access to credit for rural farmers. They probed issues to do with improving the livelihoods of livestock smallholder farmers and other value chain actors through value addition and marketing. These, it was noted, was constrained by lack of access to finance, working capital, affordable quality inputs, and well-structured value chains. . . .

‘There is, however, a need to unlock the value in livestock production. Farmers need to understand that the cattle they keep have value and they can make money out of these animals,’ he said.

‘His organisation has successfully launched the beef value chain finance initiative in Swaziland where farmers work in groups to set up pen fattening projects.

‘“Understanding the challenges faced by African farmers such as droughts and the need to make livestock production profitable, this model provides farmers to make money out of their activities,” he said. . . .

‘Beef cattle fattening using fodder based ration involves feeding of beef cattle with a protein balanced, high-energy diet for a period of 70 to 120 days. This is done under confinement to increase live weights while improving degree of finish for better grades at the abattoir.’