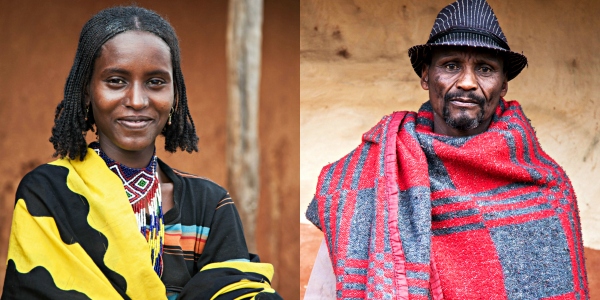 Insurance is only part of the answer,
but it is easing losses from drought
for herders in southern Ethiopia.

‘For pastoralists like Jilo Datecha, the persistent drought afflicting southern Ethiopia’s Borena zone has made the prospects for earning a living grim.

‘The semi-arid landscape of bushes and acacia trees, with no running rivers for hundreds of kilometres, makes for a precarious life for the pastoralist and semi-pastoralist communities who make their living rearing livestock.

‘Dependent on seasonal rains and boreholes to sustain themselves and their animals, around 7.8 million Ethiopians in mainly pastoralist areas of the country now rely on food aid, according to Ethiopia’s government.

‘The lack of grass for pasture forced Datecha, a middle-aged mother of six and a resident of Dembela Daden in Yabelo woreda (district) to sell six of her 25 cattle in 2016 to buy forage. Five of her cows became dangerously emaciated.

‘But earlier this year she received compensation of 7,500 birr ($325) from the Oromia Insurance Company (OIC), which offers coverage to pastoralists through an index-based livestock insurance scheme in effect since 2012.

‘It aims to cut pastoralists’ losses from drought by helping them buy forage or replace dead livestock.

The insurance company paid out a total of 1.6 million birr ($69,000) to nearly 1,500 pastoralists from West Guji and Borena zones in Oromia region in February, it said.

‘For Datecha, who has held insurance for about three years, the payment was a much-needed financial and mental boost. . . .

‘Initially intended only as insurance against the death of livestock, the insurance scheme has evolved into a product to help pastoralists keep their animals alive, according to Masresha Taye, who coordinates the programme in Ethiopia for the International Livestock Research Institute (ILRI).

‘Payments are made according to an index of the state of forage in each area and an assessment of likely drought conditions in future months. Policyholders receive money to purchase forage, water or veterinary services to keep their animals fed and healthy.

‘The premium ranges from 7.5 percent to 11 percent of the maximum sum insured, depending on the drought history of the area where the pastoralist insures their livestock.

‘ILRI provides technical support for the design and monitoring of the index, helping the insurer use satellite data to assess the state of forage on the ground. . . .

‘Taye said that, working with the World Food Programme, ILRI plans to start a similar scheme by September of this year in the Somali region, in the country’s east, another pastoralist area hit-hard by drought.’