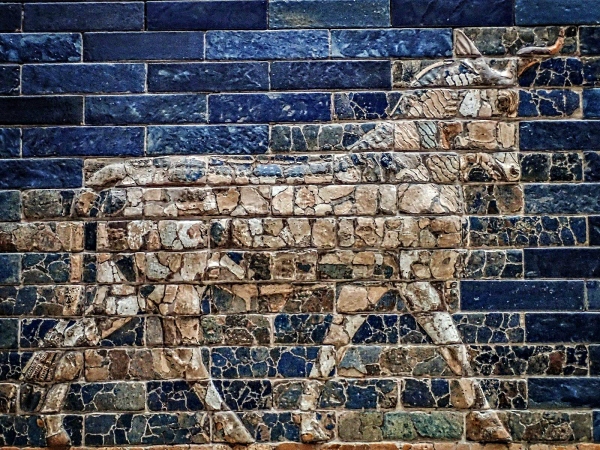 An auroch symbol of Adad (Hadad), storm and rain god of ancient Mesopotamian religions, on the Ishtar Gate of Babylon, 575 BCE (photographed at the Pergamon Museum in Berlin).

The following argument for continuing to use livestock to use the planet’s full ecological potential is made by Louise Fresco, a Dutch writer and food and agricultural scientist specializing in sustainable tropical agriculture. President of the executive board of Wageningen University and Research, Fresco is a member of the World Food Prize Council of Advisors and holds many other distinguished appointments and honours.

Fresco says that the short answer to the question of whether livestock production can meet the growing demand for meat in developing countries is ‘yes’.

‘Livestock production cannot only meet the growing demand for animal proteins, but we absolutely need livestock to use the planet in a sustainable and healthy way.

‘Here is why: food production in the 21st century needs to be better matched to food consumption so as to avoid wasting produced biomass.’

To explain what she means, Fresco questions the assumption of many people ‘that animal based food consumption should be reduced because of the larger ecological footprint compared to plant based food products. But is that really true? . . .

There are many parts of the world where growing crops or trees are not an option, but grazing livestock is. Animals can unlock nutrients from grasses that we humans cannot digest. So there is, in many areas, a logical synergy between animal and plant proteins. Small farmers all over the world know this and use animal manure and traction for their fields. Here however, we are talking about complementarity at continental or even global levels.

‘The optimum ratio depends on the local conditions for food production and to which extent circularity is arranged in a mixed crop-animal system with manure based soil fertilization. In classical commodity supply systems, the optimal production of human edible proteins per hectare of land without depleting resources or biodiversity stands at a 88:12 ratio of plant-based to animal-based proteins. But in a food system in which all available plant biomass is unlocked by using the great digestive capacity of livestock, this ratio shifts to 55:45. This means that we need less land and fewer resources to produce nutritious food, leaving more land for nature and urban development. . . .’

Meat consumption in moderate quantities is not only important for human health, but also for the health of the planet.

In fact, this is a new way of thinking, a paradigm shift, based on sound ecology. Livestock, including grazing animals, poultry and pigs, are top digesters of biomass. This means new challenges for breeding goals, feeding practices and health care in livestock management. . .

A climate-smart and nutrition-smart food production for the almost ten billion people that will live on our planet is feasible if animals are included.

To become vegan to save the world may seem laudable, but it is not as smart as consuming meat in small quantities to use the planet’s full ecological potential.

Read the whole article by Louise Fresco on the Borlaug Blog: Can livestock production meet the growing demand for meat in developing countries?, 23 Oct 2017.