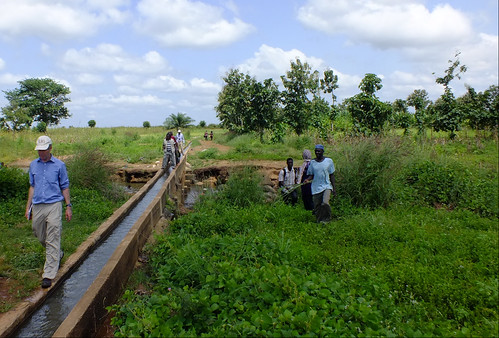 A review of a five-year irrigation project in Ethiopia, Ghana, and Tanzania shows that all the men and women farmers who had adopted irrigation practices ‘were financially better off, more food secure and had more diverse diets’, according to an article in Agrilinks.

‘Irrigation is economically feasible for smallholder families, it has multiple benefits and it saves labour,’ said Nicole Lefore from the International Water Management Institute (IWMI). But she cautioned that small-scale irrigation has high labour costs which must be accounted for. Among the measures promoted by the project is the use of irrigation scheduling tools which ‘improve water productivity and income, while reducing labour and other costs involved with overirrigation.’

The symposium on Irrigation in African Smallholder Farming Systems, held in Washington, DC on 31 January 2018, was sponsored by the Feed the Future Innovation Lab for Small-Scale Irrigation (ILSSI) project. It reviewed the role of irrigation in enhancing agricultural productivity in Africa using research findings from the three countries where the ILSSI project is implemented.

Symposium participants, however, noted that irrigation is not a cure-all for poverty, food insecurity and malnutrition but it has great potential to drive toward these development outcomes.

One of the subjects discussed at the meeting was how to use irrigation to cater to the ‘growing market for livestock fodder and…the need for feed — as well as food — security’. Participants called for stronger linkages between irrigation and livestock production, noting that more livestock fodder could be produced through irrigation to meet significant livestock farmers’ needs for high-quality feed.

Jerry Glover, senior sustainable agriculture advisor at the United States Agency for International Development Bureau for Food Security, said there was a high potential for exploiting unused niches in crop-dominated irrigation systems to produce fodder for livestock in different parts of the continent.