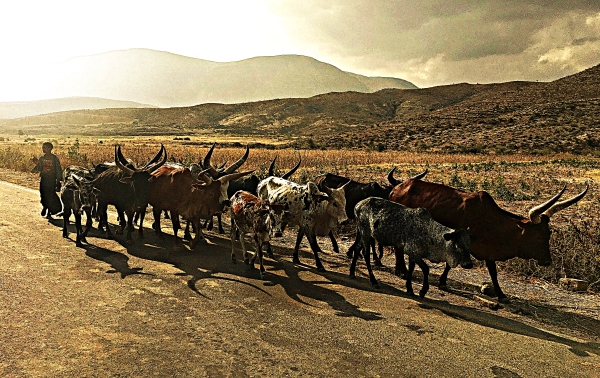 ‘The debate over whether a vegetarian diet is better for the planet is top of mind for many as news of water scarcity, climate change, and deforestation seem to worsen by the day. Sarah Taber, a US-based agricultural scientist who works as a consultant for aquaculture and greenhouse food safety, added another angle to the debate earlier this month.

‘On Twitter, she laid out the argument that calling vegetarianism and/or veganism a universally “better” diet is a form of colonialist thinking. “Let’s take a step back,” she starts:

Lots of cultures have used low- or no-meat diets. The Ganges valley, ancient Egypt, China, much of early Europe, etc.
Notice anything in common there?
They’re all very, very wet. Plants that are edible for humans grow readily.

On the other hand, lots of cultures have used mostly- or all-animal diets.
E.g. the Bedouin, Mongols, Maasai, Inuit, etc.
What do these have in common? They’re in places that are either very dry or very cold. Either the plants that grow are very sparse & tough, or none at all.

‘As Taber points out, humans can only digest certain parts of a plant: the tender leaves and stems, or the fruit, or energy-storing roots like carrots. The tough parts of the plant are inedible. She goes on:

And without intense irrigation, the ‘only’ plants that grow in dry areas are entirely made of things that humans can’t digest. They’re almost entirely cellulose. Tough stalks, fibrous leaves covered in wax and hair, thorns, etc.

That’s why we call these areas ‘scrub.’ The only use humans can make of the natural vegetation is to scrub pots.

That’s why peoples living in deserts, scrub, & dry grasslands aren’t vegetarian. They’d starve. They kept close to the animals that can digest what grows there: ruminants.

‘Large ruminant mammals like cows, goats, and yaks have a specialized digestive system, with multi-chambered stomachs that essentially ferment the tough cellulose until its broken down into nutrients the animals can use. Humans can’t do that. Which is why traditional societies living in dry, relatively barren landscapes, relied on those animals for survival.

Taber argues that the assumption that vegetarianism is always more sustainable comes from a Euro-centric perspective, where limited land and surplus water makes it relatively easy to grow food crops and less sensical to dedicate vast tracts of land to graze cows.

In other parts of the world, however, the opposite is true.

In places where there’s limited land and a surplus of water, it makes a lot of sense to optimize for land. So there, grow & eat crops.

And in places where there’s a lot of land and limited water, it makes sense to optimize for water. So there, grow & eat ruminants.

It’s really interesting to me that the conversation around vegetarianism & the environment is so strongly centered on an assumptions that every place in the world is on the limited land/surplus plan.

You know what region that describes really well? Northwestern Europe.

In many ways, viewing low/no-meat diets as the One True Sustainable Way is very much a vestige of colonialism.

It found a farmway that works really well in NW Europe, assumed it must be universal, and tries to apply it to places where it absolutely does not pencil out.

‘. . . Taber’s argument is that looking at a one-size-fits-all solution can never work. In fact, as she says, not paying attention to local conditions is one form of colonial thinking. It’s more or less what happened with the widespread dissemination of the western diet, which supplanted many local eating traditions and contributed to the rise of the modern, unsustainably-farmed, meat-based diet. It’s fair to say that the modern environmental argument for vegetarianism is more a reaction to that than it is to a rigorous consideration of what type of diet would best suit a region’s land type and rainfall patterns if we were all still truly eating off the land around us.’

Read the whole article by Zoë Schlanger at Quartz: Is promoting vegetarianism a form of colonialism?, 23 Jun 2018.