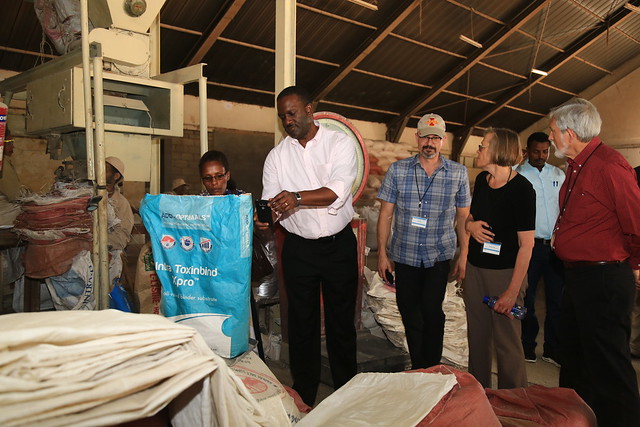 Driven by population growth, urbanization and rising incomes, demand for livestock products in Africa and Asia may increase by 200% by 2030. Increased availability of milk, meat and eggs offers huge opportunities to meet this demand, improve diets and decrease malnourishment, especially among millions of infants, school-age children and pregnant and lactating women. New livestock-related businesses could also enhance the incomes of poor people and enable them to purchase better food for their families. But the supply of livestock products in many developing countries is constrained by low animal productivity, largely due to shortages of quality animal feed.

To explore ways of improving livestock feeds and thereby increasing the availability of animal-source foods in the developing world, 87 scientists, private sector representatives and development actors met in Addis Ababa, Ethiopia, on 24-25 January 2018. Some of the key issues discussed at the second Global Nutrition Symposium, organized by the Feed the Future Innovation Lab for Livestock Systems, included the realities, implications and impact of feed shortages in Ethiopia, Burkina Faso and other countries, and possible short- and longer-term solutions towards greater production and marketing of quality feeds.

Rising demand for animal feed is also putting upward pressure on food prices. Scientists have discovered many alternative feed sources to conventional livestock feeds. For instance, producing animal feed from cassava peels using simple technologies could replace up to half the maize currently used to feed livestock; and high-protein insects could replace soybean, as could biomass from the moringa plant. But feed technologies are not widely adopted by farmers across the developing world.

Many feed producers have been unable to access raw materials or the knowhow to adopt new technologies. Distance from markets, a lack of knowledge of good post-harvest methods and the absence of quality certification standards further discourage farmers from investing in improved animal feeds for their livestock. Moreover, many feed researchers have focused on technologies rather than on understanding various other factors that influence farmers’ decisions to adopt new feed technologies.

Matching supply with demand, recognizing capacity constraints and guaranteeing ongoing support to livestock farmers were repeatedly mentioned by the symposium participants as key requirements for increasing the availability of feeds. They noted that since only a subset of farmers has the capital and capacity to invest in new technologies, rather than trying to support too many farmers, scientists and extension staff should focus their efforts on those who have the capacity and interest in improving their practices. This requires undertaking research to understand the feeds that farmers need, understanding the sociocultural context for adoption, initially giving farmers inputs needed to validate the technology being tested and then encouraging or incentivising them to invest in it themselves, and providing sustained extension support as the farmer implements the novel animal feeding techniques.

At the symposium, participants gathered in small working groups to discuss best practices and to recommend research-for-development actions. From dual-purpose crops, to quality concentrates, to microbusinesses and cooperatives, they established the groundwork for new research and promising collaborations to improve feeds.

During the course of the symposium, scientists and representatives pointed to a number of success stories in bringing their innovations to wider audiences. For instance, scientists at the International Livestock Research Institute (ILRI) have identified a high-performing Brachiaria grass. More than 20,000 farmers in Kenya who intercropped the climate-smart grass with legumes reported increases in forage availability of 9%, and a rise in milk production and weight of heifers. Feed businesses have also flourished. In Ethiopia, the ILRI FeedSeed project has helped the establishment of an agribusiness cooperative of 30 entrepreneurs, which increased sales of livestock feeds from USD20,000 to 600,000 in two years. The challenge moving forward is to learn from these experiences so they can be adopted more widely.

The Feed the Future Innovation Lab for Livestock Systems is one of 24 innovation labs funded by the United States Agency for International Development. Led by the University of Florida’s Institute of Food and Agricultural Sciences and ILRI, the lab supports research in eight African and Asian countries to sustainably improve livestock productivity and marketing and animal-source food consumption through improved technologies, capacity development and policies.