What keeps Bill Gates up at night?

It’s not child mortality. Not malaria. Not polio. All of which his foundation battles every day.

It’s not war, which most of the world tends to worry about.

It’s what Gates thinks is the most predictable threat in the history of the human race—and the we’re least prepared for.

“Look at the death chart of the 20th century,” he says, because he’s the kind of guy that looks at death charts.

“I think everybody would say there must be a spike for World War I. Sure enough, there it is, like 25 million.

And there must be a big spike for World War II, and there it is, it’s like 65 million.

But then you’ll see this other spike that is as large as World War II right after World War I, and most people, would say, ‘What was that?'”

“Well, that was the Spanish flu.”

In a 1990 paper on “The Anthropology of Infectious Disease,” Marcia Inhorn and Peter Brown estimated that infectious diseases “have likely claimed more lives than all wars, noninfectious diseases, and natural disasters put together.”

And they remain so today.

‘. . . Each new year seems to bring its own sensational candidate for the next pandemic. In 2014, of course, it was the Ebola outbreak—which killed more than 10,000 people, and sent much of America into hysterics. This year [2015], a particularly infectious form of bird flu has ripped through 14 states, killing or forcing the slaughter of 39 million birds. Public health authorities are forcing the grisly massacre because the more birds around for the flu to infect, the more chances the flu has to mutate and reassemble itself into a form that can infect humans. . . .

Zombies . . . are everywhere. And zombies are a metaphor for infectious disease.

‘”When I was a kid, I watched AIDS go from an obscure, arcane curiosity to a global pandemic,” Max Brooks, author of World War Z, told the CDC. “What drove me crazy was that unlike the Black Death or the Spanish Influenza, AIDS could have simply been stopped by a pamphlet: A couple dos and don’ts, a little education and clear-headed leadership and it might have ended up as a footnote in a virologists’ medical text. If that’s not zombies, I don’t know what is.”. . .

Illustration of the coronavirus (image credit: Sergio Santos/NursingSchoolsNearMe.com via Flickr).

“With a pandemic flu, the disease would be much more contagious than Ebola,” [Ron] Klain continues. “The people who are contagious may not have visible symptoms. It could break out in a highly populous country that sends thousands of travelers a day to the US. It could be a country with megacities with tens of millions of people. And it could be a country where sending in the 101st Airborne isn’t possible.”

‘Ebola, Klain thinks, shows how unprepared the world was for a disease that it’s known about for decades and that, comparatively speaking, spreads pretty slowly. A person infected with Ebola can be expected to pass the disease on to two people, barring effective countermeasures (epidemiologists call this the “reproduction number”). Two is not that high, as these things go. The SARS virus had a reproduction number of four. Measles has a reproduction number of 18.

What happens when the world faces a lethal disease we’re not used to, with a reproduction number of five or eight or 10? What if it starts in a megacity? What if, unlike Ebola, it’s contagious before the patient is showing obvious symptoms?

‘Past experience isn’t comforting. “If you look at the H1N1 flu in 2009,” Klain says, “it had spread around the world before we even knew it existed.” 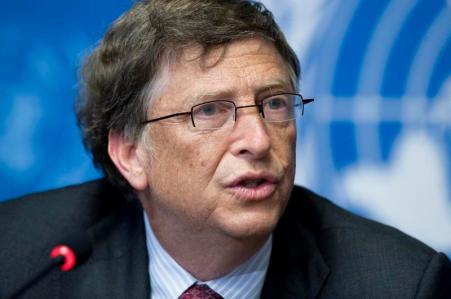 ‘Behind Gates’s fear of pandemic disease is an algorithmic model of how disease moves through the modern world. He funded that model to help with his foundation’s work eradicating polio. But then he used it to look into how a disease that acted like the Spanish flu of 1918 would work in today’s world.

‘The results were shocking, even to Gates. “Within 60 days it’s basically in all urban centers around the entire globe,” he says. “That didn’t happen with the Spanish flu.”

‘The basic reason the disease could spread so fast is that human beings now move around so fast. Gates’s modelers found that about 50 times more people cross borders today than did so in 1918. And any new disease will cross those borders with them—and will do it before we necessarily even know there is a new disease. . . .

Gates’s model showed that a Spanish flu–like disease unleashed on the modern world would kill more than 33 million people in 250 days.

“We’ve created, in terms of spread, the most dangerous environment that we’ve ever had in the history of mankind,” Gates says.

‘The science fiction writer William Gibson has a good line: the future is already here, it’s just not evenly distributed. And nowhere is that truer than in health care.

According to the World Health Organization, the United States spends more than $8,000 per person, per year, on health care.

Traditionally, Americans thinks of that as Eritrea’s problem.

But if a highly infectious, highly lethal new disease presents in Eritrea, and the world is slow to learn about it, then it will quickly become America’s problem.

‘. . . When I ask the CDC’s Frieden what’s needed to catch these diseases early, he doesn’t hesitate. “The most effective way to protect people is basic public health infrastructure,” he says. “That means laboratories for finding specimens, getting them tested, and discovering what’s spreading. It means field epidemiologists. It means emergency operation centers. And you need to have that available day in and day out. If we’ve learned anything, it’s that you want an everyday public health system you can scale up for an emergency, not a system you only use in case of emergencies.”

‘The good news is this kind of system isn’t all that expensive. Basic public health infrastructure is fairly cheap—around a dollar per person, per year. . . . The difficulty often isn’t money; it’s priorities. These aren’t sexy investments. “It doesn’t cost nearly as much as building a fancy hospital in your capital,” says Frieden, with evident frustration.

But if you can find the disease and test it, then modern technology really does come into play.

We can rapidly decode the basic structure and pathways of new diseases in ways that were unimaginable even a few decades ago—and that means we can come up with a response much more rapidly.

The bad news? “You need a government that works,” sighs Frieden.

3D print of a SARS-CoV-2—the virus that causes COVID-19—particle.
The virus surface (blue) is covered with spike proteins (red)
that enable the virus to enter and infect human cells
(image credit: NIAID via Flickr).

‘The third problem is that no one really trusts the efficacy of the international institutions that would most naturally coordinate the response. . . .

‘This isn’t just an issue of bureaucratic incompetence. The WHO is underpowered for the problems it’s meant to solve. . . .

Whether through the WHO or some other mechanism, most experts agree that the world needs some kind of emergency-response team for dangerous diseases. But no one knows quite how to set up that team. . . .

This is in stark contrast to war, which is not necessarily more deadly to the human race, but is much better planned for.

“When you talk about war,” Gates says, “there are all these rules about how the government can seize various ships.

But when an epidemic comes along, who is supposed to survey the private capacity and go out there and grab all these things?”

‘Look at what happened during Ebola, Gates continues. “Where was the equivalent of the military reserve, where you get on the phone and you said to people, Now come! And they had been trained, and they understood how to work together. People who want to volunteer, do we pay them? What do we do with them after they come back, when people might have this fear that they’ve been exposed? Are employers going to take them back? What are the quarantine rules? It was completely ad hoc.”

This is what’s so maddening about the modern fight with epidemic disease. Unlike in past eras, humanity has the tools it needs to protect itself.

“This is the hole in the global system,” Klain says, and no one really knows how to fix it.

Read the whole article by Ezra Klein, The most predictable disaster in the history of the human race, at VOX, 27 May 2015.

Read an opinion piece on ways to prevent and forestall infectious zoonotic diseases such as COVID-19 written by Jimmy Smith, director general of the International Livestock Research Institute (ILRI:
Until we start thinking of human and animal health as linked, another coronavirus is inevitable, The Independent, 26 Feb 2020 (this article is behind a paywall).

An open-access summary of Smith’s op-ed in the Independent is here:
We need a new approach, or another coronavirus is inevitable, ilri.org, 2 Mar 2020.