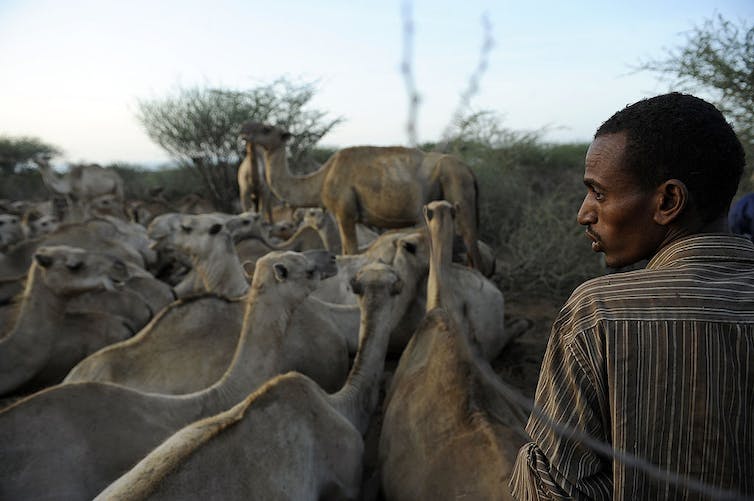 In Kenya, camels are a very popular animal to keep as livestock. There’s value in their meat and milk products and as a result, there are now over three million camels in the country.

But there is a danger that the people who come into contact with camels, and their products, face getting the Middle East Respiratory Syndrome (MERS). MERS is a disease in people caused by a coronavirus (MERS-CoV) which was first identified in Saudia Arabia in 2012.

The disease spread to several Middle Eastern, North African and European countries. MERS has since been reported in 27 countries, with almost 2500 cases and almost 900 deaths. 80% of the recorded human cases have been in the Kingdom of Saudi Arabia. Handling camels is considered a high risk activity: in Saudi Arabia up to 67% of camel handlers have been exposed.

MERS-CoV likely emerged from bats and found a comfortable home in dromedary camels. Camels are now thought to be the main reservoir of MERS-CoV infection to humans.

The coronavirus family can cause disease in people ranging from simple colds to Severe Acute Respiratory Syndrome. According to the WHO, MERS may present with fever, cough, shortness of breath and pneumonia. Severe cases could lead to respiratory failure – requiring mechanical ventilation – and organ failure. Among those diagnosed, mortality rates are as high as 35%.

Given work we, and others, had done on MERS in camel populations in East Africa, we wanted to know how big of a risk MERS is to people in East Africa.

We did this by carrying out a study in Kenya in which we looked for the presence of antibodies in high-risk groups – those who handle and slaughter camels.

We took blood samples from 58 slaughterhouse workers and 35 camel herders and, of this small sample, four out of the 58 showed that they had the MERS-CoV antibodies.

Our study also found that none of the workers tested demonstrated signs of disease at the time of sampling, nor had they been sick in the recent past. This means that exposure to the virus happened at some point in the past, and that these individuals were not actively infected with the virus.

This is the first time that camel handlers in East Africa have been shown to have been exposed to MERS.

Being positive for antibody to the virus means that these individuals had been exposed to the virus, that their bodies had mounted an immune response, and that the virus had eventually cleared from their system, probably after, at worst, mild cold-like symptoms.

There is no current evidence of MERS presenting as an acute human health or public health problem in East Africa. This means that the virus circulating in the region may not cause a particularly aggressive disease, or perhaps the symptoms are mistaken by health care providers for other, more common illness.

Those that tested positive in our new study were either the slaughterman (the person who cuts the throat of the camel) or had drunk raw camel blood. This suggests that intense contact with the virus was needed for transmission.

Our earlier work, and that of others in our institute, has shown that almost half of Kenya’s 3 million plus camels have been exposed to MERS-CoV.

In camels worldwide the disease causes a mild presentation and will usually not be noticed by their owners or by animal health providers, especially at it resolves within about a week.

Interestingly, the virus appears to have been circulating extensively in the region since well before it was identified as a zoonotic disease problem in the Middle East.

Our results suggest that the MERS virus in East Africa may be subtly different to that in the Middle East, and unlikely to cause large outbreaks. This is supported by work done by some of our colleagues on the genetic variation in the virus across its range.

Our new findings are important because they show that even if this is the case, the virus can and will infect humans from time to time, especially if they have intensive contact with the reservoir, camels.

This article is republished from The Conversation under a Creative Commons license. Read the original article.

One thought on “Do Kenya’s camel handlers face a threat from MERS? What we found”