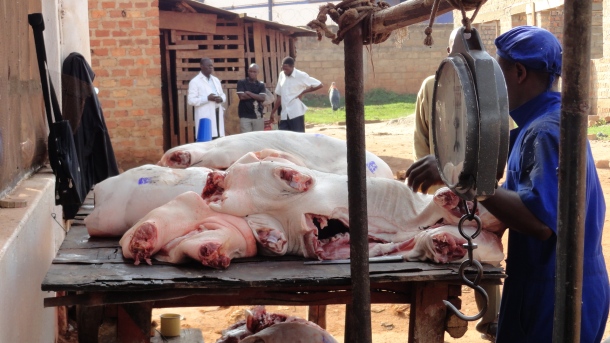 Liam Taylor, a reporter for The Economist, recently interviewed Uganda-based food safety experts at the International Livestock Research Institute (ILRI) and at Uganda’s premiere university, Makerere, in development of an article about whether wet markets will be banned in the wake of COVID-19. . . Excerpts from the published article follow.

‘. . . Bustling markets selling live wild animals, often piled one atop the other . . . give virologists the heebie-jeebies. Poor hygiene, animals kept in stressful conditions (which may affect their immune systems, making them more susceptible to disease) and traders and customers packed cheek-by-jowl can easily result in a “spillover” event, when a virus jumps from an animal into a human, causing a new disease, says Olivier Restif, a virologist at the University of Cambridge.

‘. . . [M]any virologists think SARS-CoV-2, the virus that causes COVID-19, originated in bats and then may have infected an intermediate species, possibly a pangolin, a scaly anteater prized for its meat and medicinal properties. What is undeniable is that Wuhan, in which live pangolins, civets and other wild species were sold, is exactly the sort of place where a new zoonotic disease might originate. . . .

‘Wild animals are particularly dangerous because humans have not grown accustomed to—or conquered—their bugs, as they have with many domesticated species. Because viruses and the like are nearly always passed on via the faeces or urine of the infected creature, markets with scant hygiene—for example where animals are poorly butchered and the bladder is contaminated—pose the greatest risk.

Yet many virologists, including Mr Restif, do not want to see a blanket ban on wet markets.

Rather, they prefer a more nuanced approach and more narrow regulation to control their most dangerous aspects.

To understand why, it helps to unpick what wet markets are, and their role in the feeding of billions of people.

‘The term “wet markets” . . . is, at its most basic, any grouping of vendors selling fresh goods. Markets are often watery because they are sluiced down, or because of the melting of the ice used to stop food from spoiling. . . . Wet markets come in many forms. They encompass both Tomohon and, for example, Chun Yeung Street in Hong Kong, which must adhere to stringent health guidelines and where the only live goods available are aquatic (fish are not considered a viable vector of such nasty diseases as COVID-19, in part because they lack respiratory systems comparable to those of humans, which many viruses attack).

‘Between those extremes lies somewhere such as Kalerwe market in Kampala, Uganda’s capital. At first sight, it presents many of the risks associated with wildlife markets. Live chickens can spend three weeks in cramped cages before being sold, says Clovice Kankya, a biosecurity expert at Makerere University. . . .

‘But the risks from the market can be overstated. With the exception of chickens, which are sold live, most animals in Kampala’s market have been slaughtered in abattoirs, rather than freshly killed in the market. Cases of animal-to-human disease transmission in Uganda have happened “mainly in the village”, where animals are slaughtered in homes without any inspections . . . .

‘Closing down wet markets would have wider implications. A study of 350 such markets in Nanjing, an urban area of 8m people in eastern China, found that they accounted for 80% of the city’s vegetable sales. Across the whole country it has been estimated that such places handle 73% of all the fresh vegetables and meat that is bought. In contrast, the study found that supermarkets tended to be where Nanjing’s households went to buy processed food.

Were markets closed and locals pushed into supermarkets, . . . their health would inevitably suffer, as they would be more likely to pick processed meals over fresh produce. . . .

Wet markets in China owe their popularity to their several virtues. Compared with supermarkets, they are more likely to be within walking distance of people’s homes. They also tend to be cheaper . . . [and] prices also tend to be negotiable . . .

All of which means that rather than pushing for the wholesale banning of wet markets, many scientists are calling for a more subtle approach.

The World Health Organisation (WHO) is working on a proposal to recommend suspending the sale of live wild mammals in marketplaces for food, but not live farmed creatures such as poultry and fish, which pose a lower risk and where controls can be introduced. . . .

Plenty of people will continue to call for outright closures. A lot of non-Westerners view this as cultural deafness. . . .

A full ban would also threaten to throw up an unintended consequence. By forbidding the selling of live meat in places where it is a “strong part of its source of food or a cultural pull,” says Mr Restif, “it will just go to the black market, where there can be no regulation.” . . .

No matter how well-regulated wet markets are, it will not end the threat of zoonotic diseases. Their danger lurks wherever humans encroach on wild animals, whether through logging, the building of settlements or the hunting and selling of meat.

But tighter oversight would at least go some way to reducing a big source of risk.

With the stakes so high, both for those vulnerable to a future pandemic, and the billions who rely on markets for nutrition, a measured response will be welcome.

Among Liam Taylor’s background notes for this published article in The Economist are the following, unpublished, observations and quotes.

‘Mohammed Juma is standing in a tin box in a roadside market in Kampala, the Uganda capital, swinging a machete at a slab of beef. Around three-quarters of all beef sales in the country are at small butcheries like his. One survey found that just 7% of them had soap for handwashing and 26% had receptacles for waste. But Mr Juma has no fears about hygiene. He points to a health inspector’s stamp on the goat’s leg hanging behind him. Anyway, his meat is cheaper and fresher than the shrink-wrapped sausages in the supermarket close by. The customers keep coming.

‘Anxieties about food and disease are understandable. . . . But the risks can be overstated. “We may know the hazards, but what is most important is the risk of exposure,” says Jolly Hoona, who is in charge of veterinary public health in the agriculture ministry. Pork sold from a butcher’s stall is roughly the same quality as that in the supermarket, says Kristina Roesel, who researches food safety in east Africa for the International Livestock Research Institute (ILRI). And consumption habits reduce the danger. Although most milk is sold raw, Ugandans usually boil it before drinking. They like their meat extremely well-done. . . .

Read the whole article, Curbing zoonotic diseases: Will wet markets be hung out to dry after the pandemic? They can breed new diseases, but banning them entirely might not be the best response, Economist, 26 May 2020.

For more information, read Wildlife markets in the pandemic: Prohibit or preserve them? Ban or promote them?, on ILRI.ORG, 2 Sep 2020.

Or contact ILRI research partner Clovice Kankya, a professor at Makerere University and a co-investigator in a food safety component of an ILRI project called Boosting Uganda’s Investment in Livestock Development (BUILD), at clokankya [at] gmail.com, or ILRI scientist and project leader Kristina Roesel at k.roesel [at] cgiar.org.