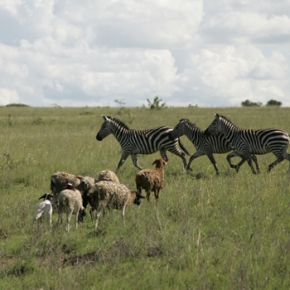 The wildlfie-rich rangelands of Kitengela, outside Nairobi, Kenya (photo credit: ILRI/Stevie Mann). Scientists at the Nairobi, Kenya, headquarters of the International Livestock Research Institute (ILRI) are this week hosting a regional inception workshop on a new CGIAR Research Program on dryland agriculture. Three livestock-based models likely to be discussed at this week’s dryland agriculture workshop … END_OF_DOCUMENT_TOKEN_TO_BE_REPLACED

Nairobi cityscape in the background of Nairobi National Park (photo on Flickr by Luigi Guarino). ‘As pastoralists in the North Rift grapple with the drought that has affected more than 12 million East Africans, a new model to pay the residents for conserving the ecosystem in reserves and parks is helping them to diversify income … END_OF_DOCUMENT_TOKEN_TO_BE_REPLACED

The African Cape buffalo (photo credit: ILRI/Elsworth). Is conservation of wild mammals and their environments in Africa at a crisis point? Are wildlife populations “crashing” in Africa’s most renowned wildlife reserves? Two new reports suggest that may be the case. The following was reported in the Guardian today. ‘The Okavango delta in Botswana has suffered … END_OF_DOCUMENT_TOKEN_TO_BE_REPLACED

The African Cape buffalo is all but gone on the Mara ranches adjacent to Kenya’s Masai Mara Game Reserve; ‘The status of Masai Mara as a prime conservation area and premier tourist draw card in Kenya may soon be in jeopardy’—Joseph Ogutu (photo credit: ILRI/Elsworth). Matt Walker reports on the BBC this week that populations of … END_OF_DOCUMENT_TOKEN_TO_BE_REPLACED

The Maasai Mara has lost almost 60 per cent of its large animals, including lions, elephants, buffaloes, leopards and rhinos, according to the United Nations Environmental Programme. A continent-wide study, released last week found big mammal populations inside national parks, including Kenya’s Maasai Mara and Tanzania’s Serengeti to have declined by an average of 59 … END_OF_DOCUMENT_TOKEN_TO_BE_REPLACED

ILRI’s Research of 2009 is again reported on the ‘Dynamics of Mara-Serengeti ungulates to land use changes’. A former project member, Dickson Ole Kaelo, speaking on the importance of conservancies in sustaining the Mara’s wildlife, is quoted saying, “This land is critical to the survival of most resident and migratory wildlife species such as … END_OF_DOCUMENT_TOKEN_TO_BE_REPLACED

Wild grazing animals in Kenya’s Masai Mara National Reserve are steadily disappearing, a study has found. Numbers of giraffe, warthog, impala, topi and hartebeest fell by 50% or more between 1979 and 2002. The falls are linked to rapid growth of Maasai settlements around the reserve, say scientists from the International Livestock Research Institute (ILRI). … END_OF_DOCUMENT_TOKEN_TO_BE_REPLACED