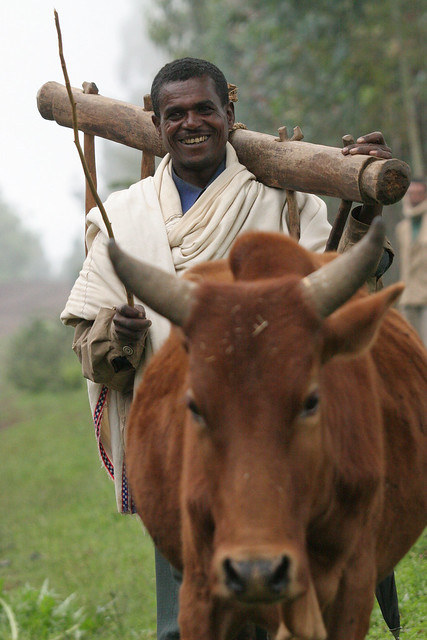 Samuel Adugna carries his wooden plough out to his fields for a day’s work with his two oxen near Wenchi town, in the Ethiopian highlands (photo credit: ILRI/Stevie Mann).

In case you missed it, earlier this year, Washington Post food–science columnist Tamar Haspel served up an interesting story in The Plate, a blog of National Geographic‘s Future of Food series.

Her story’s about a long-term research project’s attempt to develop disease-resistant cattle for African farmers.

Why should such a story interest readers of National Geographic?

Well, for one thing, the disease (whose full name is a 13-syllable mouthful—’African animal trypanosomiasis’—with researchers calling it ‘tryps’, local people ‘nagana’ and medical doctors ‘sleeping sickness’ when it occurs in people) is a big deal. Spread by the tsetse fly, a large biting insect, as it takes a bloodmeal from an animal through its needle-like proboscis, trypanosomiasis sickens and kills cattle across Africa’s fertile middle ‘tsetse belt’, a vast region stretching from the east to west coasts and encompassing an area as large as continental USA.

For another reason, the disease costs Africa huge losses, not only in economic terms (several billion dollars a year, by most reckonings), but also in terms of people’s nutritional status and agricultural livelihoods—critical matters on a continent still stalked by hunger and malnutrition and most of whose people still grow food for a living.

And for a third reason—the research is attempting to build tryps-resistance into Africa’s cattle by inserting a baboon gene into them that manages to kill all the parasites, one-celled animals called trypanosomes, swimming in the bloodstream of the cows.

Here’s some of what Haspel has to say.

‘With one gene, molecular geneticist Steve Kemp may someday be able to boost the success of small farms across a huge swath of central Africa.

‘The gene is from a baboon, and it’s important because it produces a protein that kills a diabolical protozoan called Trypanosoma brucei. Trypanosoma brucei causes a deadly wasting disease–trypanosomiasis–in both cattle and humans. . . .

‘The problem is pressing, and it caught Kemp’s attention when it became apparent that at least one kind of African cattle–the N’Dama breed, native to west Africa–had some natural tolerance of trypanosomes.  Kemp, who’s originally from the UK and works at the International Livestock Research Institute (ILRI) in Nairobi, set out to investigate the source of that tolerance, in the hopes of breeding it into other kinds of African cattle. . ..

‘While Kemp was studying trypanosomiasis in cattle, Jayne Raper, Professor of Biological Sciences at City University of New York’s Hunter College, was studying its absence in baboons. Along with a few other primates, baboons have complete resistance to the disease, and Raper was studying the source of that resistance, looking for clues to fight the human version of trypanosomiasis, which infected 20,000 people in 2012, according to World Health Organization estimates. Raper discovered that a component of baboon cholesterol, a protein with the charismatic name ApoL1, kills the trypanosome by punching holes in its cell walls. (Humans produce a similar protein, which kills some trypanosomes but not T. brucei.)

‘As Kemp describes it, the two scientists had an aha moment at a meeting at ILRI in 2006. Raper was working on isolating the baboon gene in the hopes of created trypanosome-resistant transgenic mice to prove her concept. Kemp explained the problem with cattle and, well, aha! . . . .’

Read about another article by Tamar Haspel, We’re having all the wrong debates, posted on the ILRI Clippings blog 28 May 2015.

Follow Tamar Haspel on Twitter and don’t miss her monthly Unearthed column in the Washington Post (which she started in the fall of 2013 declaring, ‘Welcome to Unearthed, an effort that will dig deep to try and figure out what’s true and what isn’t in the debate about our food supply’.)

2 thoughts on “DID YOU MISS IT? Who’s developing African cattle resistant to sleeping sickness—and why it matters—by Tamar Haspel”