On 6 October 2016 the Ambassador of the United States to Burkina Faso, H E Tulinabo S Mushingi, visited Ziga in Yatenga Province, one of the implementation sites of the Feed the Future Sustainable Intensification Innovation Lab (SIIL) project in the country. 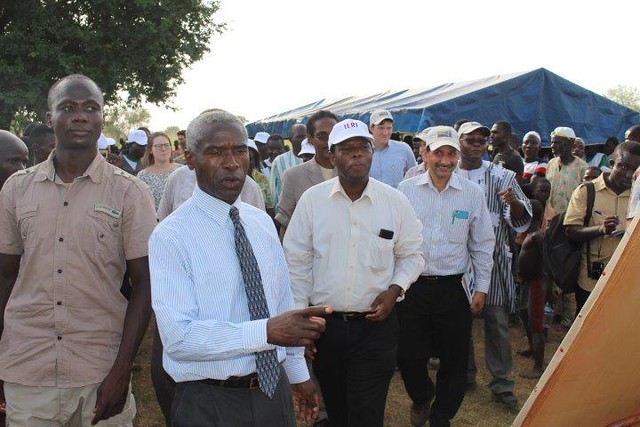 The ambassador was accompanied by the Burkina Faso country representative for the United States Agency for International Development (USAID) and SIIL’s director, and colleagues from Kansas State University.

The event, which was attended by more than 300 people, also showcased one farmers field school that is led by FNGN which is demonstrating the potential of intensification of crop-livestock systems to facilitate farmer learning and adoption of intensification options. Members of the field school demonstrated early maturing dual-purpose cowpea and improved dwarf sorghum varieties.

Ambassador Mushingi highlighted the importance of sustainable agricultural intensification and the need to promote it to enhance food security.

‘In view of the rapid population growth and the associated food security challenge in many developing countries while the land area remains the same, it is necessary to intensify agricultural production to produce more and feed the increasing population. The ambition of Uncle Sam and his partners is to make villages such as Ziga a community where hunger and poverty has no place,’ said Ambassador Mushingi.

Speaking at the event, USAID officials praised the project’s achievements saying it provided a model that similar programs such as Resilience in the Sahel (RISE) could learn from.

The event was organised by ILRI and led by Augustine Ayantunde, SIIL’s principal investigator in Burkina Faso.