The genomes of Africans
and people of recent African descent
house a huge amount of diversity
that scientists have only begun to explore.

‘. . . In the past five years, international research funding organizations have invested more than US$100 million in projects to boost genetic research on people in Africa. These studies could lead to improved treatments for Africans as well as for people of recent African descent in Europe and the Americas, who tend to experience more ill health than other ethnicities—a situation that is often attributed to socioeconomic challenges, but which some scientists say could also have genetic roots.

‘Although few would question the importance of African genomics, opinions differ on whether this will translate into better care. Globally, precision medicine has failed to live up to its promise, even in countries that spend lots of money on health. And some argue that the money spent on investigating genes should instead be used to improve basic health care on the continent. . . .

‘There’s a big problem, however. Precision medicine is expensive. For a continent that, for the most part, struggles to provide even basic health care, tailor-made treatments for individual patients may seem like an unaffordable luxury. 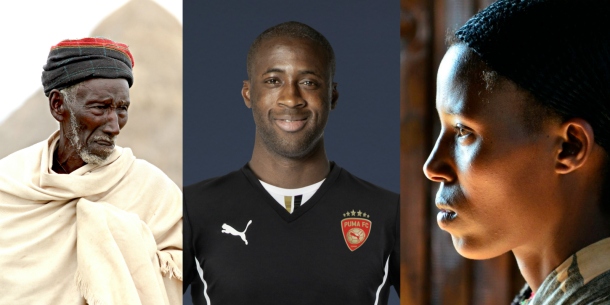 The extraordinary genetic diversity of African people:
The individuals above are from (left to right)
Ethiopia, Cote d’Ivoire and Kenya
(photo credits: ILRI, Wikipedia, CIAT/Neil Palmer).

‘Enter ‘precision public health’—a new approach to precision medicine that bases health decisions on populations and communities rather than on individuals. It would use genomic insights into a country’s population to inform general treatment programmes. For instance, a country might tweak its essential medicines list that specifies the drugs it buys in bulk at reduced rates from pharmaceutical companies, to avoid medicines that are known to cause problems in its population.

‘This is already happening in some places. Botswana—a middle-income country—stopped using the three-in-one drug containing efavirenz in 2016, opting instead for a newer and better-performing, but more expensive, drug called dolutegravir. The gene variant that causes problems with efavirenz is common in Botswana—around 13.5% of the population has two copies of it. And in 2015, Ethiopia banned the use of the painkiller codeine, because a high proportion of people in the country carry a gene variant that causes them to rapidly convert the drug into morphine, which can cause breathing problems or even death. . . .

‘But to fulfil this vision, a lot of research needs to be done on African genomes.

Most genomic studies so far have focused on white people of European descent.

A meta-analysis published in Nature last year revealed that only 3% of global genome-wide association studies—which link genetic traits to patterns in health, disease or drug tolerance—had been performed on Africans, compared with 81% on people of European ancestry.

An added challenge is that Africans are the most genetically varied people on Earth.

Africa is where humanity originated and where humans have lived the longest, so populations there have diverged more than on other continents.

Its people have genetic variants that are found nowhere else.

‘These two factors mean that scientists are missing a big piece of the puzzle when it comes to human genetics, says Charles Rotimi, founding director of the National Institutes of Health’s Center for Research on Genomics and Global Health in Bethesda, Maryland.

Tests developed to inform treatment options for white people might be unsuitable for Africans and people of recent African descent.

“We are in a position to make wrong diagnoses,” he says.

The extraordinary genetic diversity of African people:
The individuals above are from (left to right)
Malawi, Niger and Ethiopia
(photo credits: ILRI)

‘Although most of the H3Africa projects have yet to publish results, examples of the types of finding it might provide are starting to appear in the literature. For example, in March this year, Rotimi and his colleagues reported that about 1% of West Africans, African Americans and others of recent African ancestry carry a gene variant that increases their risk of obesity. And a collaboration between South African and Italian scientists resulted, also last month, in the identification of a genetic variant that seems to increase the carrier’s risk of heart disease and cardiac arrest. . . .

These insights could lead to better treatment for Africans and people of recent African descent, and perhaps result in discoveries about human genetics.

‘We are all African beneath our skin, so understanding African genomes is going to be of global benefit,’ says Rotimi.

‘The attention that genomics research is getting in Africa has not been without critics. Cost is a major concern. Like most developing regions, Africa is seeing a rapid rise in non-communicable diseases such as cancer. In developed countries, cancer treatments are profoundly informed by genomics. But many African nations have only a handful of cancer specialists, and limited capacity for diagnosis and treatment. Although breast-cancer rates, for example, are lower in parts of Africa than in developed countries, more Africans die from the disease and not just because of a lack of access to care—standard treatments sometimes seem less efficient in some African women. Still, basic cancer-therapy equipment may be higher on the wish list than new genomic tests tailored to African people’s tumours. . . .

‘There are those who think that projects such as H3Africa are overstating the significance of the genetic variance between Africans and Europeans, and its effects on treatment options. . . .’

Read the whole article by Linda Nordling in Nature: Putting genomes to work in Africa, 6 Apr 2017.

One thought on “African genomes: The world’s richest human diversity is being explored, at long last”