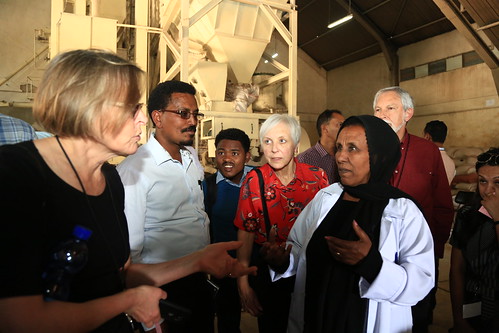 After decades of research into enhancing the supply and quality of animal feed in developing countries, many of the constraints have been identified. Yet the adoption rate by farmers of low-cost technologies that could significantly improve how livestock are fed, and as a result, the productivity of their animals, has remained very low. Improving feed quality, availability and safety are all essential to increasing livestock productivity and to ensuring adequate consumption of nutritious animal-source foods in developing countries. A comprehensive set of livestock feeding solutions is needed from researchers, governments and crucially from the private sector.

To address this need, more than 85 scientists, development actors and private sector representatives met in Addis Ababa, Ethiopia, on 24-25 January 2018 to explore ways of increasing the availability of animal-source foods in developing countries. Some of the key issues discussed at the second Global Nutrition Symposium, organized by the Feed the Future Innovation Lab for Livestock Systems, included the realities, implications and impact of feed shortages in West and East Africa, and possible short- and long-term solutions towards greater production and marketing of quality feeds. Recommendations that emerged from the symposium are informing action plans on the way forward in terms of research and development programs.

Broad consensus was reached as to the primary roles of government in creating enabling environments and the private sector in ensuring proven technologies are widely adopted. Governments need to support investment into the adoption of technologies, both in terms of raising the awareness of value chain actors, but also through the establishment of regulations ensuring the production of quality feeds and the provision of tax incentives to encourage investment.

The keynote speaker at the symposium, Harinder Makkar, consultant and former senior animal production officer at the Food and Agriculture Organization (FAO), underlined the crucial role of public-private sector collaboration:

‘The FAO assessed why viable technologies have not been adopted. We found that where a private sector entrepreneur or a cooperative was involved in the implementation of the program, farmers kept on using technologies, even after the project had ended. Bringing on private entrepreneurs is very important because they address institutional and other aspects critical for scaling, which are as important as the technology aspects. The private sector brings in investment and economies of scale. Only the private sector can fully dedicate the time and resources to fill the animal feed production gap. But they need support and resources which can only come from governments.’

Symposium participants also pointed out that governments need to reassess their views of the importance of feed and food crops and encourage researchers to focus on improving understanding of how to enhance market mechanisms. Governments have frequently prioritized the production of food and cash crops over those of fodder crops. The land made available for fodder crops has tended to be where other crops were not able to grow. The consequence has been low-quality, low-yield feeds. But Adugna Tolera, professor at Ethiopia’s Hawassa University, told participants that certain fodder crops, like Rhodes grass, may be far more competitive than food crops grown on such land. 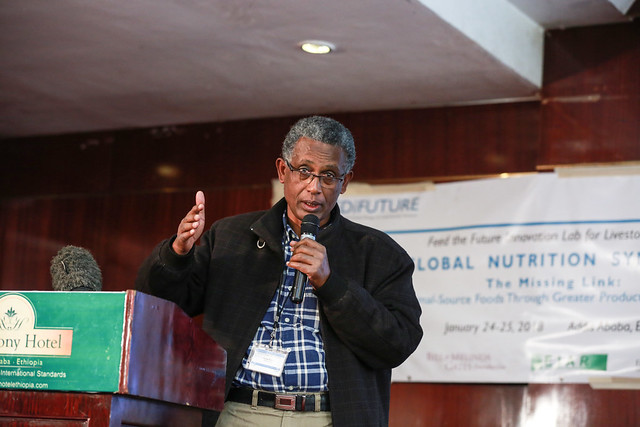 ‘We need to do more economic evaluations of the opportunity cost of using land for different crops, for food and forage crops. But there are certain parts of the country, around urban areas such as Addis Ababa, where you have the dairy belt, where forage production would be more competitive. My feeling is some areas, even fertile areas, might be better used under forage production,’ said Tolera.

Two key integrated areas for action research highlighted by participants include improving the nutritional composition and digestibility of crop residues, and increasing the use of nutritious feed supplements and the recycling of food waste for animal feed. Research in India by CGIAR centres, including the International Livestock Research Institute (ILRI), has demonstrated the business viability of improved crop residues.

By involving the private sector early on, governments and the development sector can undertake research to understand the feeds that farmers and other value chain actors need, the availability of resources, giving producers the materials, including land if necessary, and providing extension support to demonstrate the viability of new fodder varieties and animal feeding techniques.

The annual Global Nutrition Symposium’s organizer, the Feed the Future Innovation Lab for Livestock Systems, is one of 24 innovation labs funded by the United States Agency for International Development. Led by the University of Florida’s Institute of Food and Agricultural Sciences and ILRI, the Innovation Lab works in eight African and Asian countries to sustainably improve livestock productivity and marketing and animal-source food consumption using appropriate improved technologies, capacity development and policies.