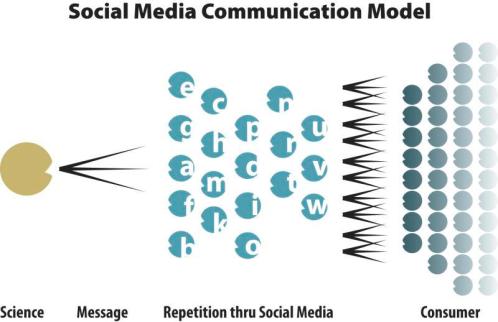 Figure from a paper by Capper and Yancey in Animal Frontiers: Communicating animal science to the general public.

The current (July 2015) issue of Animal Frontiers, Communicating the Animal Sciences Effectively, focuses on the challenges associated with how best to communicate animal science information with policymakers, the public, and students. Communicating effectively with these stakeholder groups is critical to the future of the livestock and poultry industries.

One of the articles featured gives tips on how livestock scientists can better communicate with livestock consumers.

‘It’s tempting to leave animal science communications to those with formal training or to the new intern who’s keen on learning about Twitter, but this no longer fulfills the animal scientist’s partial role as an educator. . . . [S]imply publishing a paper in an academic journal does not gain traction beyond other animal science professionals without accompanying press releases or social media posts.

‘Ultimately, livestock industry sustainability is not reliant simply on continuing economic viability and environmental responsibility, but also social acceptability. Consumer acceptance can only be maintained and improved into the future by better communication: in essence, helping the consumer understand and accept the tenets and practices of livestock production. . . .

‘[W]e do not need to fully research or understand an issue to form strong opinions, whether negative or positive (Arthur, 1994). These opinions may be reinforced by bad news bias– the assumption that a negative assertion is more important than a positive one. . . . [I]n short, bad news sells. This may be particularly dangerous, as negative pieces of information confer more strongly held beliefs (Mizerski, 1982) and have longer-lasting effects (Richins, 1983) than positive statements. Indeed, Richey et al. (1975) showed that one negative piece of information was sufficient to neutralize five pieces of positive information.

‘When negative pieces of information are reinforced with data or numbers, they also gain credibility, regardless of the validity of the data. . . .

‘[W]e have to decide not just what information we want to convey to the consumer, but who is our target audience? . . . [P]rovision of “websites honestly answering food production questions” were cited by 43% of consumers as being a means by which trust in food production could be improved (SHS FoodThink, 2014a); therefore, it appears that we have an opportunity to build on this using a range of internet-based tools, technologies, and applications. . . .

‘Social media as we currently know it is a relatively new way of communicating (Facebook was launched in February 2004 and Twitter in March 2006) . . . . Rather than communicating with people of differing views, social media and the internet have stimulated the development of a tribal communication model (The Center for Food Integrity, 2014). People naturally gravitate toward others who share their beliefs and interests online and have little interest in seeking out dialogue with those who do not share the same opinion.

‘At first, it may seem hard to break out of our trusted networks to have conversations with other people who are not part of our “tribe.” . . . . Once we establish shared values, our opinions and expertise will be of greater value to the community (The Center for Food Integrity, 2014). . . .

1) As scientists, we’re often wedded to facts and data to get our messages across. If it doesn’t have a P-value, we can’t publish it. By contrast, consumers want shared values and relationships—they don’t care what we know unless they know how much we care (Maxwell, 2007).

2) As scientists, we often put a lot of emphasis on our work being novel and original, with little point in repeating what others are doing. However, to get messages across to consumers online, we need many voices and repetitive messages to reinforce our points.

3) As scientists, we are often very detail-oriented and want to make sure that we cover every question thoroughly. Yet consumers want to see the big picture and then ask specific questions that relate to their concerns. . . .

4) As scientists, we often want to reference everything—if it’s not published in a peer-reviewed paper, then we can’t say it. Yet consumers get more information and understanding from comparisons and anecdotes. . . .

5) As scientists, we are often uncomfortable about expressing opinions or discussing areas outside our specific area of expertise. However, when we blog or express ourselves on social media, we are not only experts in our field, but also have a significant amount of knowledge about other areas of food production. . . . [W]e should not be afraid to offer information and opinions outside our masters or Ph.D. area. . . .

6) As scientists, we have to publish or perish. Peer-reviewed articles are one of the major reference points by which we assess our progress. Yet the majority of consumers do not have the time, inclination, or scientific background needed to access and interpret journal articles . . . .

7) As scientists, we are often looking to disprove a null hypothesis or gain a significant result. . . . However, our public posts, blogs, and tweets have a far greater reach and audience than one person—we need to have a greater focus on promotion and proactive messages of agriculture that will reinforce the positive opinions of the 95% of the population who buy food produced conventionally, rather than simply getting into vehement arguments about the merits of system Y or technology X. . . .

Read the whole article in Animal Frontiers: Communicating animal science to the general public, by Jude L Capper and Janeal W Yancey, Vol. 5 No. 3, 16 July 2015. Follow these authors on Twitter at @BoviDiva and @MeatCounterMom, respectively.

One thought on “Communicating animal science to the general public”