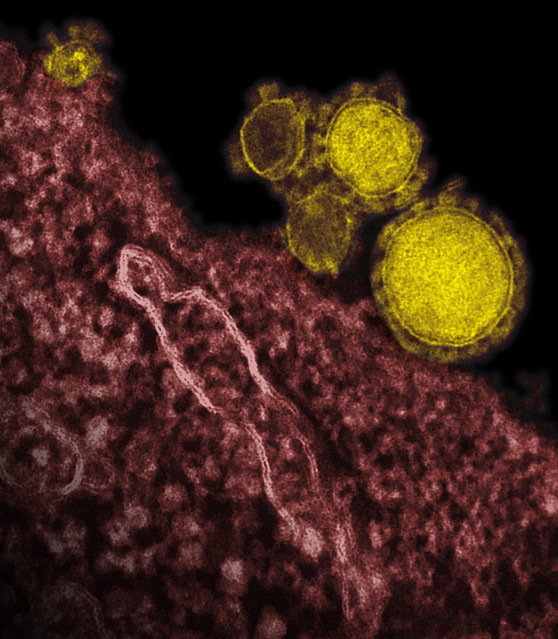 ‘. . . Researchers at the Nairobi, Kenya-based International Livestock Research Institute (ILRI) and at the University of Bonn Medical Center in Germany have found evidence of MERS-CoV antibodies in archived blood samples from two of 1,122 Kenyan livestock handlers, collected between 2013 and 2014. Both people whose blood showed signs of past MERS-CoV infection—a 26-year-old woman and 58-year-old man—were asymptomatic and kept livestock other than camels, the researchers report in . . .  Emerging Infectious Diseases. Camels do roam the counties in eastern Kenya where both livestock handlers live, and—as in the Middle East—people in the region consume camel products.

‘While there have been confirmed cases—even an outbreak—of MERS outside the Middle East, all of these to date have been linked to importations by people who had traveled to the affected area.

This study is the first to report non-travel-associated cases of MERS-CoV infection in Africa.

‘“The absence of autochthonous human MERS-CoV infections in Africa has triggered hypotheses regarding differences in disease transmission between Africa and the Arabian Peninsula and has raised doubts regarding the role of camels as a source of infection,” the researchers wrote in their paper. “Our study provides evidence for unrecorded human MERS-CoV infections in Kenya and the proportion of seropositive specimens that we found is comparable to previously reported proportions of unrecorded infections in the general population in Saudi Arabia.”

‘MERS is likely underdiagnosed in Africa, the researchers reported. Viral diversity may be in part to blame, according to ILRI’s Joerg Jores.’

“We need to collect more data to understand any diversity in the MERS virus found, for example, in Kenya and Saudi Arabia, and how the virus spreads,” Jores, a coauthor on the study, wrote in an email.

For now, said Jores, figuring out how people are infected with MERS-CoV is key.

“We need to know more about the epidemiology of the pathogen, especially in Africa,” he wrote in an email.

Read the full article by Maina Waruru in The Scientist: Non-travel-associated MERS in Kenya, 23 Mar 2016.