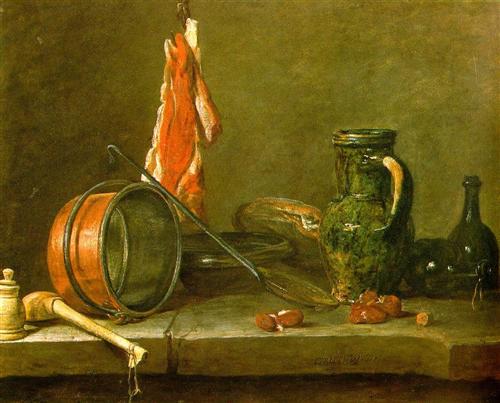 Jean-Baptiste-Simeon Chardin, A Lean Diet with Cooking Utensils, 1731 (via Wikiart).

Consumption of animals helped hominins to grow bigger brains. But in a world rich with food, how necessary is meat?

‘. . . [S]ome 3 million years ago, the climate changed and the savannahs—along with their plentiful food supply—dried up. . . . Many mammals, including some primates, went extinct, but others adapted. . . . Only two types of primate survived the climate catastrophe, says [Manuel] Domínguez-Rodrigo. There was a “plant-processing machine on the one hand and a meat-eating machine on the other hand”, he says. “The meat-eating machine evolved a bigger brain.”

The meat-eating machine became us. . . .

‘To build and maintain a more complex brain, our ancestors used ingredients found primarily in meat, including iron, zinc, vitamin B12 and fatty acids. Although plants contain many of the same nutrients, they occur in lower quantities and often in a form that humans cannot readily use. For instance, red meat is rich in iron derived from haemoglobin, which is more easily absorbed than the non-haem form found in beans and leafy greens. Furthermore, compounds known as phytates bind to the iron in plants and block its availability to the body. As a result, meat is a much richer dietary source of iron than any plant food (see ‘Meat efficiency’). “You would need to eat a massive amount of spinach to equal a steak,” says Christopher Golden, an ecologist and epidemiologist at Harvard University in Cambridge, Massachusetts.

‘The implications for cognitive health are huge. There is a clear, but underappreciated link between meat and the mind, says Charlotte Neumann, a paediatrician at the University of California, Los Angeles, who has studied meat eating in Africa and India for the past three decades. Deficiencies in the micronutrients found in meat have been linked with brain-related disorders, including low IQ, autism, depression and dementia. . . .

‘In the 1980s, researchers began to suspect that a lack of meat in some poor rural villages was contributing to a spectrum of childhood problems, including short stature, weakened immunity, social difficulties and poor school performance. When researchers from five universities studied the effects of chronic malnourishment in Mexico, Kenya and Egypt, they found that children who consumed the greatest amount of meat and dairy products scored highest on physical, cognitive and behavioural tests, particularly in Kenya. But was the absence of meat really to blame? . . .

‘So Neumann began a trial in Kenya. . . . Compared with the other groups, students in the meat group had greater muscle mass and fewer health problems, and even showed greater leadership in the playground. Cognitive performance was stronger, too: the meat group outperformed other groups in maths and language subjects.

‘Neumann was not surprised by the results. The typical diet in rural Kenya is subsistence-based and does not include many nutrients that help the brain to grow. The challenge now is to get people to consume more meat, which is widely regarded as too expensive.

What people don’t realize, Neumann says, is that to nourish the brain, pretty much any animal matter will do: “Meat can be a worm, caterpillar or termite. It doesn’t have to be butcher meat.”. . .

‘The micronutrients in meat have become an essential part of our diet over millennia. . . . [B]y at least 1.5 million years ago, says Domínguez-Rodrigo, humans had become so adapted to eating meat that without it they would die.

Research is starting to provide some clues as to how meat helps the brain to function. . . .

[T]he nutrients found in meat are important for health and cognition, but only up to a point.

“Meat packs a lot of minerals and vitamins in just a small amount of food,” says Domínguez-Rodrigo. “Eating meat is like eating a power bar.”

‘So the key question becomes how much meat should a cognitive-health-conscious person eat. Too little can delay development and cognition. But too much, particularly if it is low quality and mass produced, is associated with other health concerns, such as heart disease and cancer, along with memory problems later in life. . . .’