Belgian artist Koen Vanmechelen has created a chicken with genes from different chicken breeds from all over the world. Now he’s bringing it to America to help diversify our poultry.

The Cosmopolitan Chicken Project is the work of Belgian artist Koen Vanmechelen, who for 20 years has been on a one-man mission to breed a chicken flock that defies the constraints of industrial agriculture. 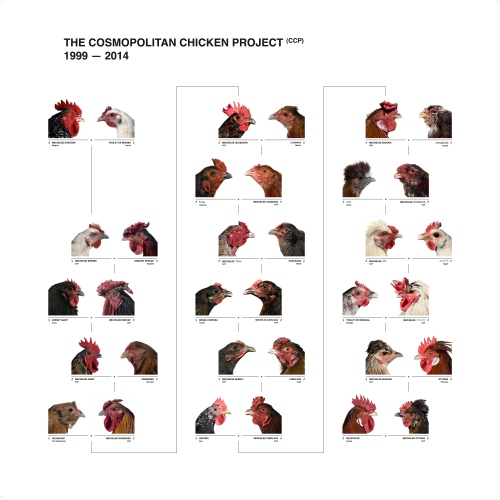 ‘In 1999, he took a chicken breed from Belgium, the Mechelse Koekdek, and a chicken breed from France, the Poulet de Bresse, and mated them together on the border between the two countries. Next, he took one of the offspring—a black chicken, among many white and grey animals—and mated it with an English breed in the middle of London. Every year since, he has added a new breed from a new country to the genetic line.

‘Twenty years later, he arrives in Detroit to add an American Wyandotte—named for a Great Lakes Native American tribe—to the mix. . . .

Chickens were domesticated from the red junglefowl more than 7,000 years ago. By 2011, they numbered over 20 billion, with the most rapid population growth in recent decades (everyone really loves eating chicken and eggs).

To Vanmechelen, the history of chickens is like a mirror for human culture and migration—with modern chicken breeds often reflecting a characteristic of its country. French chickens have a red head, white body, and blue legs, he notes. A Turkish chicken is a “long crower,” he says, like a minaret. 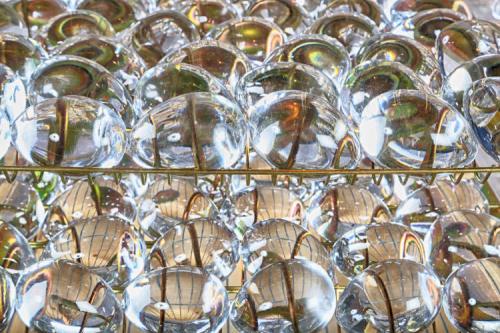 ‘”Chickens are so closely related to humans, and later I discovered that there are scientists who are drawing the world map of migrations through the chickens,” Vanmechelen says.

‘Scientists have been interested in Vanmechelen’s work. There are varied breeds of chickens all over the world, but in many countries or regions, commercial breeds have become genetically isolated and often quite fragile, says Olivier Hanotte, a principal scientist at the International Livestock Research Institute who has worked with Vanmechelen. Though he says most commercial breeders won’t admit it, to him, low genetic diversity is a problem today as more chicken production shifts to the developing world, where highly-controlled, industrialized poultry farms aren’t common.

“Their commercial birds will simply not survive here,” [ILRI’s Olivier] Hanotte wrote in an email while doing work in Ethiopia.

‘. . . The 20th generation Community Chicken Project will be on display at the Wasserman Projects this fall.’

Read the whole article by Jessica Leber on Fast Company’s CoExist: The world’s most cosmopolitan chicken is coming to Detroit, 23 Sep 2016.